How Can You Identify a Market Bottom?

February saw a severe and sudden market plunge. Investors and money managers were too surprised to take any action. They just sat there looking at their screens in amazement while the indices made severe intraday moves, up and down, as investors tried to determine what was causing the volatility.

Read this message carefully. It may help you identify the next big turn in the markets.

On February 2, the computers of the algo-trading firms had taken over, causing moves that made no real sense. The following Monday, February 5, the DJI plunged from a loss of 900 points to a loss of 1600 points in virtually minutes, closing with a loss of 1,175 points.

That marked the first time in history the Dow ended the day with a 1000 + point plunge. 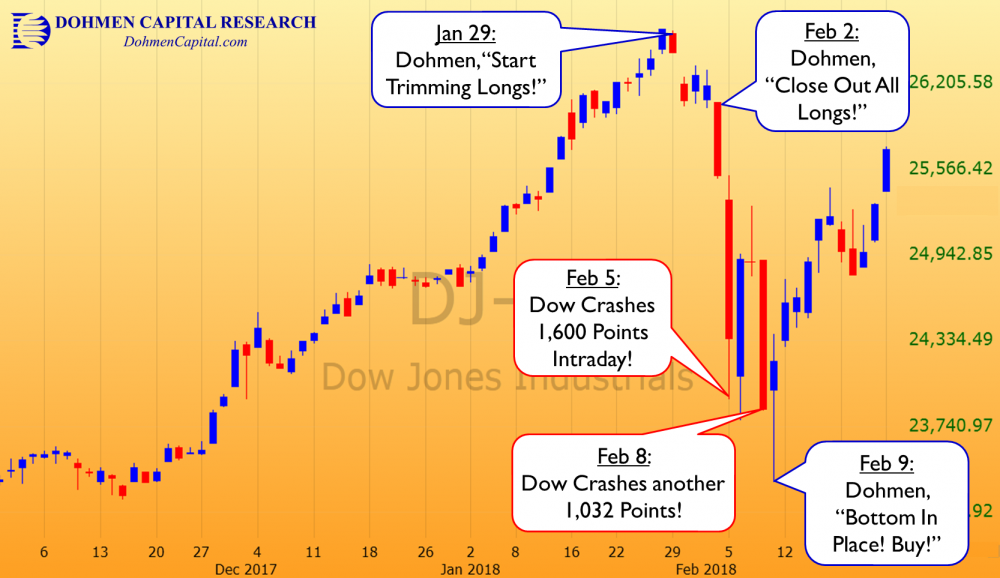 What clues did we see that helped us warn our clients ahead of the major downturn along with calling the ensuing market bottom?

At the end of that ​Thursday, February 8, we wrote in our trading services:

“The DJI has now had the worst decline since 2008. Some of the major indices are now officially in ‘correction’ territory as they are down more than 10% from the top.”

However, that day there were some signs that a bottom was nearby. We continued our message by saying:

“Tomorrow morning could see a big shakeout with a large, downside opening gap. The last two hours tomorrow will be very important. Chances are good for a bottom tomorrow. The PPT and Wall Street know that a bad Friday could trigger something too serious on Monday. A stand must be made.”

The big reversal to the upside came, as we expected, on Friday, February 9. That day, the S&P 500 and DJI​ ​plunged to their important trendlines exactly (see their daily charts below).

Then ​the support actions from the PPT and Wall Street finally started to work at the lows, as we had surmised the previous day, helping the markets rebound and turn positive. 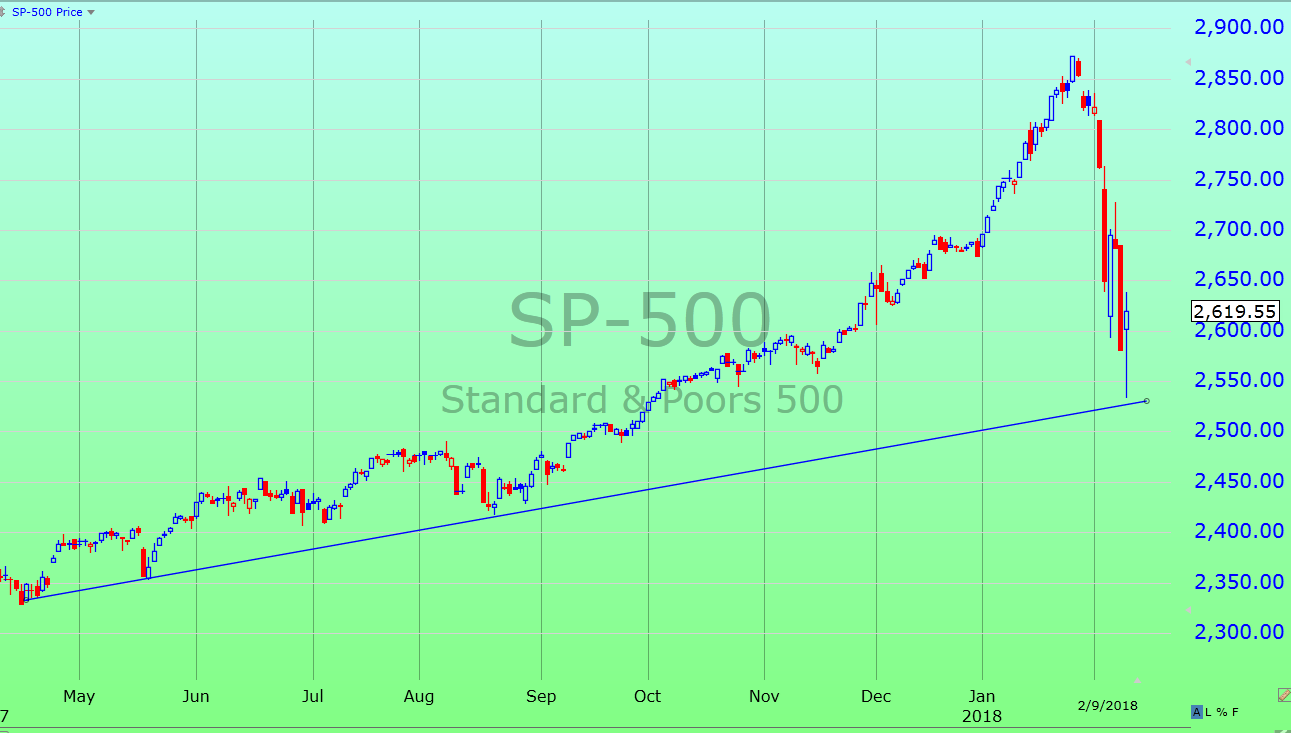 That Friday saw the final battle between the bullish and the bearish algos. The Dow soared 349 points in early trading, then erased the gains and fell to a loss of 500 points after the margin calls went out, triggering selling.

After hitting its trendline, it took the DJI just 15 minutes to ​reverse from down 500 points to completely erasing that loss. Incredible​! The rally then continued and the DJI closed with a gain of 330 points for the day. 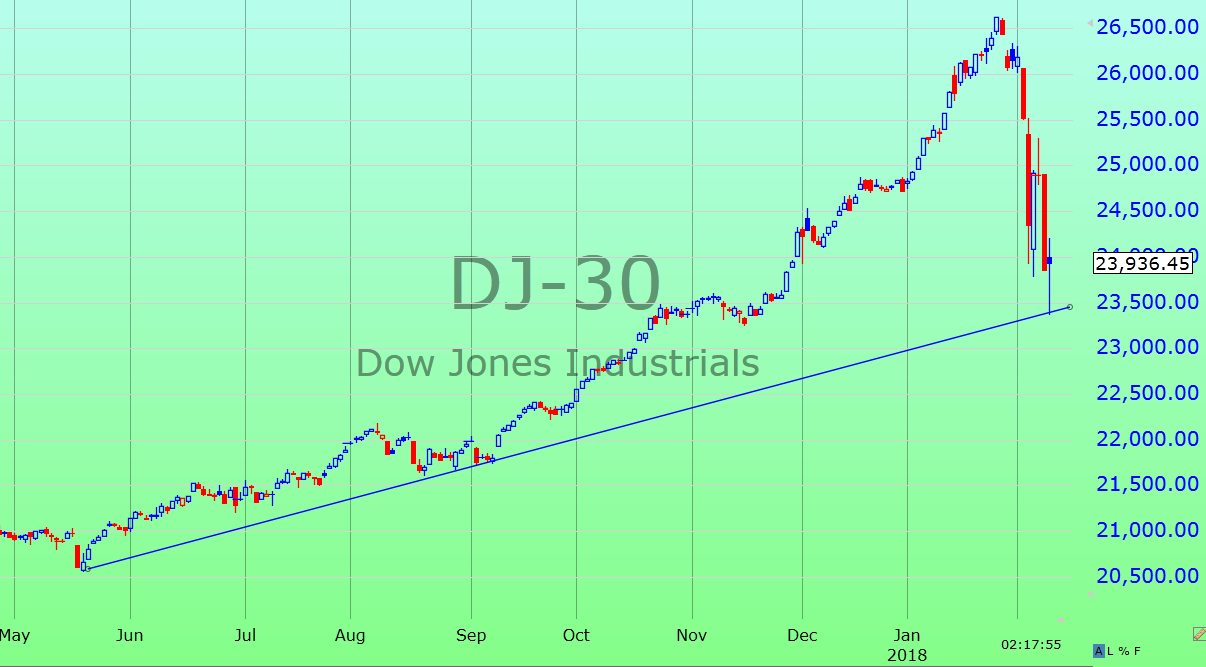 ​​The damage at the lows had been severe, ​as the S&P 500, Russell 2000, and the NYSE Composite all br​oke through their 200-day moving averages. Had they closed there, it would have produced a dismal Monday. However, by the ​end of the day, all four major averages ​closed ​higher.

That day left traders and investors asking, “does this mark the bottom?” In our ​​Smarte Trader on February 9th we gave a list of clues that allowed us to correctly answer that question.

Here you can see how important advanced chart and technical analysis, combined with decades of market experience, are at critical times like these.

We have been doing it for about half a century, and we are still learning!

Ask yourself, how much would such analysis have been worth to you during the volatile market selloff and re​covery?