How You Can Know if a Crisis or a Continued Bull Market is Ahead!

The markets are now experiencing volatility that we haven’t seen in quite some time. Just last week the Dow lost over 1400 points! Then, this past Monday, it soared 669 points, the third biggest point gain on the Dow ever and its biggest point gain since 2008.

However, on Tuesday, the markets sold off once again as the Dow plummeted triple digits for the third time in four days.

What’s one clue signaling that this market could be in big trouble? The NYSE Composite Index, which is comprised of all the stocks listed on the New York Stock Exchange, about 2000 stocks. It’s much more indicative of the market than the 30 stocks in the DJI, or the stocks in the S&P 500, which is dominated by about a dozen stocks.

Take a look at the chart above. On Tuesday, March 27th, it just closed below its 200-day moving average for the second time in three days! It didn’t even close below that level during the February market correction!

Although all the chatter lately is about a “market correction,” we see signs that something much more serious could be ahead. For example: since the highs this year, Facebook, Twitter, and Tesla are all down 23%. Those are bear markets for the handful of stocks that propelled the stock market indices upward the past year

As you have seen since late January, the world’s financial markets are getting very challenging, for the average investor and even hedge funds and money managers.

Just this past January, the bullish sentiment was at the highest levels since 1929 before the historic crash, and 1999, ahead of the crash of 2000.

The vast majority of investment professionals don’t see signs of a problem in the markets.

According to the latest Investors Intelligence survey, only 12% of investment advisors were bearish.

That’s the lowest number in 35 years! It’s a big warning.

You see, I started my firm in January 1977. In 1978, I made a number of forecasts that seemed ‘outlandish’ to Wall Street analysts at the time. But they came true over the next 1-2 years.

These appeared improbable to the conventional analysts. But these unlikely events happened over the following two years!

Those correct forecasts were carried by the Wall Street Journal and other financial media. And that established my Dohmen Capital Research as a top “contrarian” investment and economic research firm, one that had no conflicts of interest and even dared to use the word “sell.”

Now we see many of the same converging factors in our indicators that enabled me to make the ‘outlandish,’ but correct, forecasts in March of 1978 and other times just ahead major market declines.

Most of the Wall Street analysts you see in the media were still in diapers in 1978. Long-term experience and a good memory are very valuable for navigating the current market environment.

In 2007, I wrote the prescient book, “Prelude to Meltdown,” predicting the 2008 global crisis. No one wanted to believe that a global crisis was looming, yet my forecast was right on target.

Our Analysis and Proprietary Indicators Show that the Next Global Crisis could be Much More Severe Than the Crisis in 2008!

At Dohmen Capital Research, we look at what really drives the investment markets according to our “Theory of Liquidity & Credit.” It states that the major determinant of major stock market trends is NOT earnings, but the change in Liquidity & Credit.

Analysts always focus on earnings as if that were the key to stock market prices. You may be surprised to learn that in our work this popular “wisdom” is WRONG!

Another example: the biggest stock gains in the market are those with the highest P/E ratios. That’s totally contrary to what you hear from Wall Street in regard to picking stocks.

It’s not high valuations, such as very high P/E ratios, that predict a market top. In fact, the highest P/E ratios occur at great market bottoms, not the tops.

In 2007, Wall Street was totally oblivious to the debt implosion that was materializing.

However, our clients were alerted and not only were safeguarded during the crash, but also had a chance to make immense profits with our recommendations while the markets crashed. 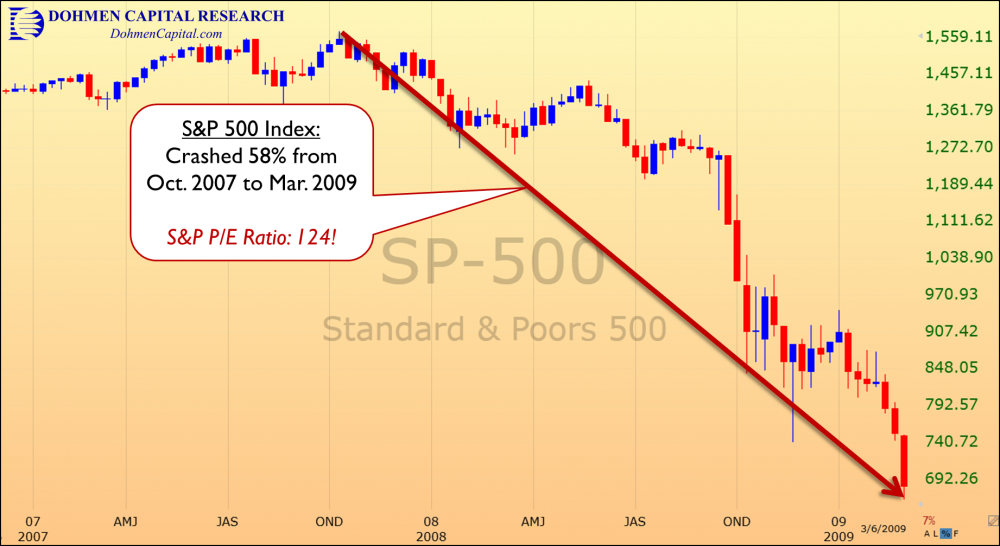 I am currently looking at factors not mentioned by Wall Street.  We love to be in the small minority. It’s logical that it is impossible for the majority to be right in their predictions, because then the prediction wouldn’t come true.

At my firm, we look below the surface, we question the validity of all the governmental statistics, and we look at investor sentiment statistics. When it comes to market timing, we look at our advanced technical indicators.

If something is ‘obvious,’ it is usually obviously wrong. I always say, “what everyone knows, is usually not worth knowing.”

But don’t worry, there is still time to prepare your portfolio.

I am now alerting our astute clients around the world of the opportunities and the storm clouds I see forming in the global financial markets. It means it is time to plan ahead.

The global market plunge this past February was only a warning shot, as we’re seeing right now with the latest market selloff!

This is the time to get the best professional market guidance you can find. It can mean the difference between painful losses and beautiful profits, even in a bear market.

In each issue of our Fearless ETF Trader, now in its 20th year, you receive our advanced technical analysis, market timing signals, and specific ETF “buy” and/or “sell” signals.

When market conditions call for it, we also recommend “inverse ETFs”, which are designed to rise in price as the index, the sector, or the geographical global areas decline. It’s ideal for making money during market plunges and crashes. During the 2008 Financial Crisis, our clients smiled all the way to the bank.