“Bert Dohmen, one of the all-time Kings of Technical Analysis…has always been fiercely independent in his thinking. Bert Maverick, I call him. That’s a good thing, because in markets the consensus is usually wrong, which is why Bert is usually right.”
-Robert Prechter
Founder of the Elliott Wave Financial

“Bert Dohmen, one of the best in the volatile world of trading and investing, a real Pro”
-Gene Marcial
Business Week

“…the Wellington Letter…is the most thoroughly researched and best written investment newsletter that I receive.”
-Neil Cavuto
Fox Network

“If your wealth is in the stock market, you’ll want to consider subscribing to The Wellington Letter. Bert’s ability to predict and explain the ups and downs and twists and turns of the stock market borders on pure genius. He has gotten people in and out of markets early—and explains why. Bert has the uncanny ability to see what really is going on inside the markets. Although I am not invested in the stock markets, I look forward to receiving ‘The Wellington Letter.’ Bert takes the time to educate and inform, using his 40-plus years of experience to explain why things are happening in the global markets. He is a real teacher, a friend and a regular guest on Rich Dad Radio.”
-Robert Kiyosaki
Author of Rich Dad Poor Dad

“We find it to be one of the most informative of the many financial and investment publications we monitor.”
-R.C.W.
United Stations Radio Network, Arlington, VA

“[Bert Dohmen has] gained an international reputation for his accurate forecasts of the economy and major investment market.”
-Wall Street Transcript

“Not only do you give clear, understandable descriptions of the economy and the markets, but you’ve given me the opportunity to get in before the markets moved, and out with good profits.”
-Clyde Harrison
Ex-VP, Chicago Board of Options

“Bert Dohmen has astounded our conference audiences for over a decade with forecasts which at the time seemed impossible, but nevertheless came true. One of his most remarkable forecasts was at our late Fall 1987 conference, where he predicted a 500-1000 point decline in the Dow before year-end.”
-Charles E. Githler
Chairman, The Money Show

“…Bert Dohmen captured the actual levels of the DJIA precisely. In a business with so many variable influences, such performances are to be congratulated.”
-Timer Digest

“Bert Dohmen is one who has a track record – a great one.”
-Don Bauder
Syndicated Financial Columnist

“I have devoured the WELLINGTON LETTER since 1982. Bert’s timely advice is almost secondary to the educational aspects of the letter. His total understanding of the economy, the FED, and the markets makes each issue an addition to my library.”
-Gregory L. Morris
President, Murphy-Morris Corporation

To read the most current excerpts and updates, go to: CURRENT OUTLOOK 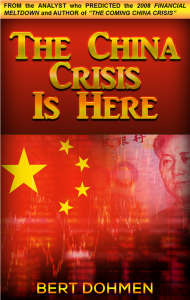