Home » Will The Fed Crash The Markets Again?

Will The Fed Crash The Markets Again?

According to its mission statement, the responsibility of the Fed “is to foster the stability, integrity and efficiency of the nation’s monetary, financial and payment systems in order to promote optimal macroeconomic performance.”

Judging by the results over their 105-year history, the Fed has totally failed (for more see my latest Wellington Letter). There is no evidence of the Fed having even gotten close to its aforementioned goal.

Note that nothing in the above “Fed’s mission” statement says it should control interest rates. Yet, that is the Fed’s most important tool the majority of the time. It’s like driving a car with only the gas pedal and brake and forgetting about the steering wheel.

Should the Fed really try to control something as market driven as interest rates when they cannot even forecast a recession? Before the 2008 Global Crisis they stated “there is no recession in sight,” when indeed two years later it was determined that the recession had already started at the time that statement was made. In 2017, the Fed chief made a similar statement.

Of course, no one can predict the future perfectly. Therefore, isn’t it foolish to try to steer what you can’t predict? Interest rates are much too important to leave to a handful of economists. It’s like thinking the weather man can control the weather. Market forces have a much better way to adjust to market conditions.

The stock market obviously is also very important for the economy. Shall we now tell the Fed to manipulate stock prices, never letting them decline, and seeking to have them increase at a certain “normalized” rate per year?

The PPT (officially the “President’s Working Group on the Financial Markets”) is close to that. It has the mission to produce “orderly markets.”

Market forces, although unable to eliminate volatility, can probably do a better job. It is the interaction of 330 million people in the marketplace. To think that a small group of Ph.D. economists know better than all the people buying and selling based on need and ability to pay is a highly questionable assumption.

It almost smells of Marxism, where governmental committees determine the output and supply of all products. The committee would even determine what percentage of shoes should be black or brown. It doesn’t work very well.

The Federal Reserve president of New York, speaking at a central banker outing in beautiful Bali (those guys know how to live), said “U.S. interest-rate increases will help reduce risk-taking in financial markets.”

That would’ve been a great statement about six years ago. Now it is a little too late. Sure, when credit tightens, and no one can get a loan, “risk taking” vanishes. But the markets will suffer immensely.

To hike interest rates another 3 or 4 times now as the Fed intends is like taking away the crutch of a disabled person. He will fall to the ground.

The Fed president said: “But I would also add that the normalization of monetary policy in terms of interest rates does have an added benefit in terms of financial risks.”

Here we have the popular phrase heard often from central bankers: “normalization of interest rates.” They never say what normal interest rates are or how they determine it to be.

Is it the 21.5% prime rate of the year 1980? Or is it the zero interest rate policy (ZIRP) of a few years ago? There was nothing normal about the interest rates between 1960 to 1990, even if you average them out. Yet apparently that’s what they want to get back to?

Look at the last 110 years of T-bond yields, which show the very high, abnormal rate levels in the 1980s. Does the Fed include that huge rate rise in its normal interest rate levels? We haven’t heard the answer.

The chart suggests to me that 3.5% on the long-term T-bond would be normal over the last 110 years. We would disregard the period of 1970 to 2000 because that was a historic abnormality produced by another huge Fed mistake from 1978 to 1980.

Lo and behold, the 3.5% level is close to where long-term T-bond yields are now. Look at the perfect, inverse correlation of the S&P 500 with the T-bond yields. That suggests that stocks are now or probably on a long trip down. 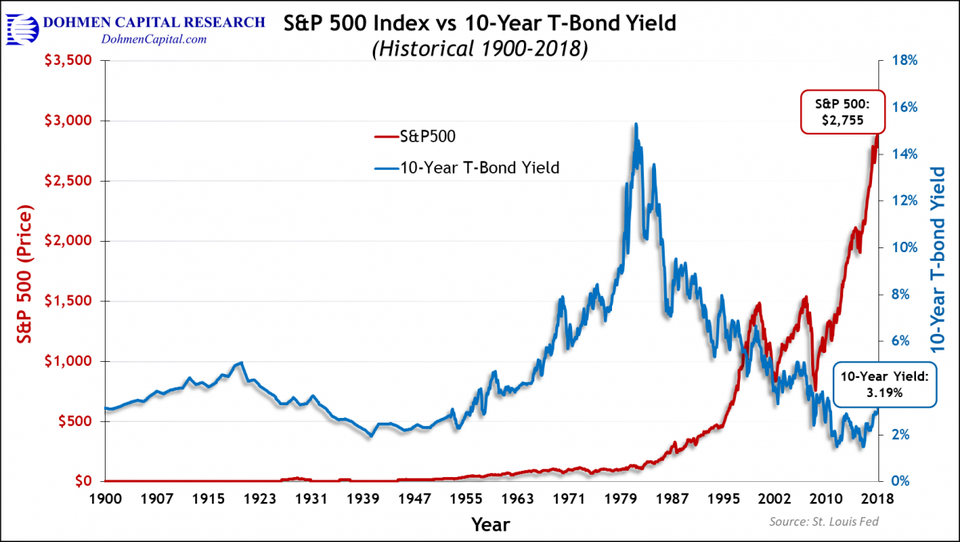 The 55-year period after WWII was a time of great artificial liquidity production by the Fed, called “printing money” or more elegantly, “monetizing the debt.” This fueled ever higher prices and the reduction of purchasing power of the U.S. dollar.

A house in California that now goes for $1 million probably cost around $50,000 in the 1950s to build. This rising monetary inflation by the Fed, accelerating each decade, pushed interest rates and prices higher.

In 1980, inflation was double-digits and the new Fed Chairman Paul Volcker decided to stop inflation and crunched money supply. Interest rates soared even further from the already high double-digit levels because of tight money. The prime rate soared to 20% in 1980 as I had forecast in the early days of the Wellington Letter, and later that same year, to 21.5% when Volcker produced tight money.

But it did the job of killing double-digit inflation. It then produced 20 years of disinflation and declining gold prices, as we had also accurately forecast.

In fact, I participated profitably in the gold bull market to the 1980 top, then gave a sell signal on gold at $694. Our studies at the time showed that the gold bear market would last 20 years. The bottom in gold was around $250 per ounce in 2001, right on target.

Interestingly, our study in 1980 also said that this would be followed by a 30-year gold bull market. Now gold is around $1,210, almost five times higher than in 2001. It remains to be seen if that was correct.

Globally, today we are still in a long-term disinflationary/deflationary environment. The huge global debt pyramid is threatening to collapse, which produces price pressures on many durable goods.

That’s why after the last global crisis, interest rates in the U.S. went to virtually zero, and in the EU and Japan they went negative–below zero for the first time in recorded history.

The great balloon of debt around the world triggered by these low rates is deflationary or disinflationary.

The past 18 months have seen a small rebound in inflation measures. But right now my work says it won’t last. Yet the Fed is acting as if the inflationary fires are burning out of control.

What was normal for 55 years up until the year 2000 is not normal in the current environment. That’s the drastic mistake the Fed is making now; trying to produce “normalization.”

Or does the Fed think they can “normalize” only interest rates, while every asset class whose price is a function of interest rates will not normalize?

As a child, I loved and believed the Grimm’s Fairy Tales. And now the Fed wants us to believe their own version. Are we at the start of another great “policy error” at the Fed?

We’ll work as we always do to provide our best investment and economic research, allowing investors to get the true insights, not only on Fed actions, but also on the daily moves in the investment markets.