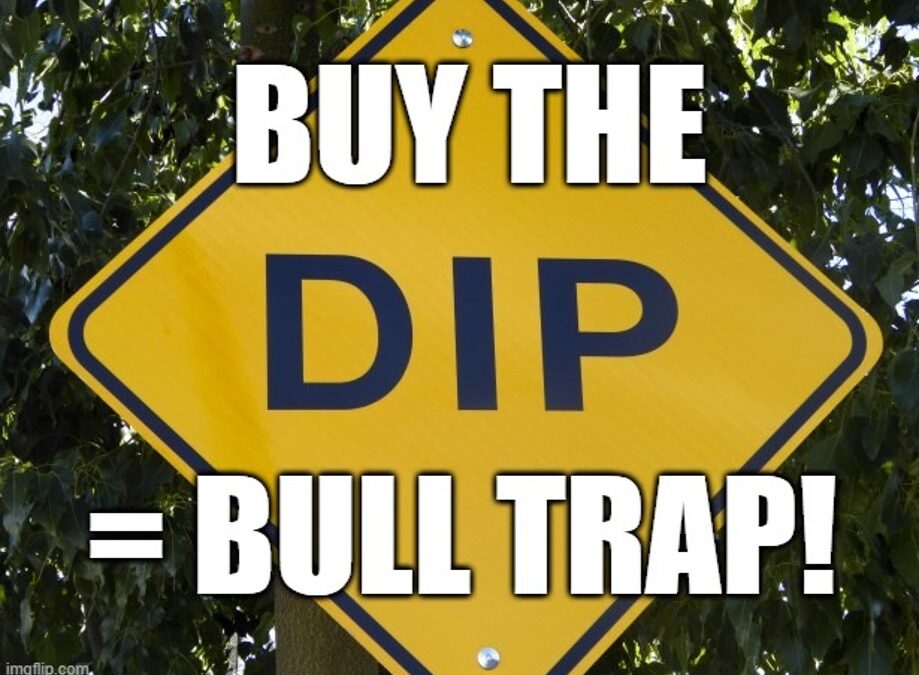 “Buy the dip” is now the rallying cry on Wall Street.

We wrote during short-term selloffs the past two months that the brief declines were a test to get traditional money managers and investors conditioned to buy such “dips.”

When the real plunge finally starts, which may be what we’re seeing now, these people will continue to buy all the way down, giving the HFT (high frequency traders) plenty of profits from short selling.

In our trading services (Smarter Stock Trader and Fearless ETF Trader) on February 11, we wrote:

We maintain our view that manipulation by the HFT industry is taking advantage of the mania. To trap as many as possible at the top, the game is to condition the novices to believe that every short-term setback must be bought. We are now seeing this in the aftermath of the GameStop (GME) implosion, and the cannabis plunge.

After several of these “fake-outs,” the true plunge will eventually occur, which will trap most of the speculators.

Last week, the real stock market came to the surface. We wrote: “overvalued, over-believed, overextended, and ready for a big readjustment.”

Everything that was hot over the last 7 months was dumped.

It was unusual that during the sharp decline of the NASDAQ since February 16, tens of billions of dollars flowed into the market. Usually money flows out during corrections. This shows that the novice investors are at the height of irrational optimism.

But what about today’s (March 9, 2021) rally? We saw a nice recovery by the hardest-hit stocks and ETFs, with many seeing nice double-digit gains.

Don’t be fooled – rallies like those we saw today are a symptom of higher volatility, not a signal of strength. The lack of substantial increases in volume is a tipoff.

The financial media today whipped the flames of enthusiasm. It is never good to follow that.

Consider the QQQ, an ETF tracking the NASDAQ 100, whose daily chart is shown below:

We wrote last week that the 300 area would be first support coming from the previous resistance level that played a key role in halting the QQQ’s advance in late 2020 (dashed blue line).

The point here is that the major stock indices rarely enter long and sustained losing streaks, even during important corrections and bear markets. In fact, the bounces can often appear incredibly strong, with good market breadth and big single-day moves, especially when conditions appear oversold.

The March 9 rally could be just another critical trap for the bulls.

The bond market continues to play an important role in stock market’s recent moves, as we wrote about in our previous article, “The Rout in the Treasury Markets is Far From Over.”

In our newest Wellington Letter issue, “The Bull Trap Slams Shut!”, we examine how the credit markets would have a big impact on equities and what the recent selloff in bonds signals to us:

Huge losses in U.S. Treasuries, due to the excessive leverage employed by hedge funds and derivative traders, create the danger of a “credit market event,” such as a huge institutional failure that would produce selling in other assets just to meet margin calls.

One confirmation is that the junk bond market finally had a big decline, after making a new high in mid-February. One more big down-move in these, and we would get seriously concerned.

The daily chart below shows the junk bond ETF, JNK (candlesticks), versus the TLT (thin blue line). It is easy to see that the majority of the selling over the last few weeks was focused on the TLT.

It’s important that the JNK held up this long. But now, the poorer credit vehicles are weakening despite their higher yields.

The junk bond ETFs had an anemic bounce today. This is just another clue. We could now see a short-term rally in T-bonds for several weeks, but a decline in junk bonds.

If a “credit market event” occurs sometime this year, anything and everything will be sold for dollars. This has implications for investors in stocks, gold and silver, and almost all other asset classes. This is why it is critical to stay informed on the movement of rates and bond prices.

Most novice investors are now stuck with big losses in their portfolios. Their mistake was to go with the crowd.

Now, the second mistake that will be made by many investors will be to stay with the losers in the hope they will bounce back.

Our research suggests now is the time to be extremely cautious, especially given the looming threat of a credit market event, which could have adverse consequences in many markets beyond stocks and bonds.

Our latest Wellington Letter investigates this possibility in detail, discussing our short- and long-term outlook for various sectors and some of the more popular areas right now including the ARK funds, SPACs, EV stocks, highlighting the important warning signs that we’re seeing today.

Get your copy here: 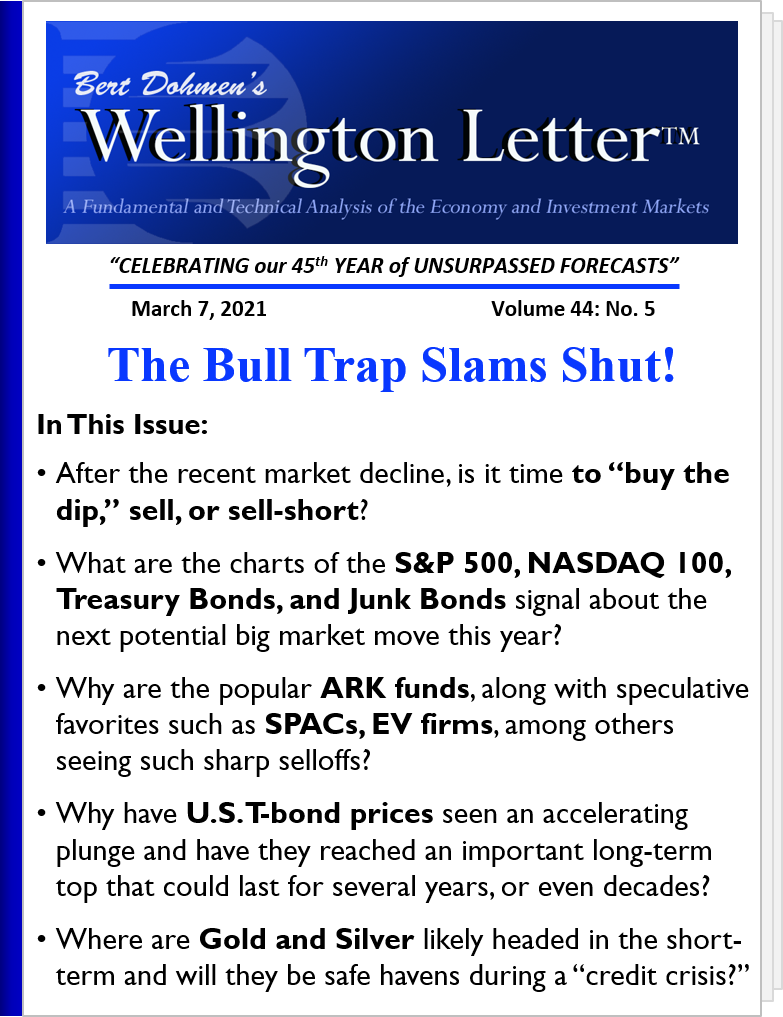