Home » Don’t Be Fooled By The Latest Stock Rally

Don’t Be Fooled By The Latest Stock Rally 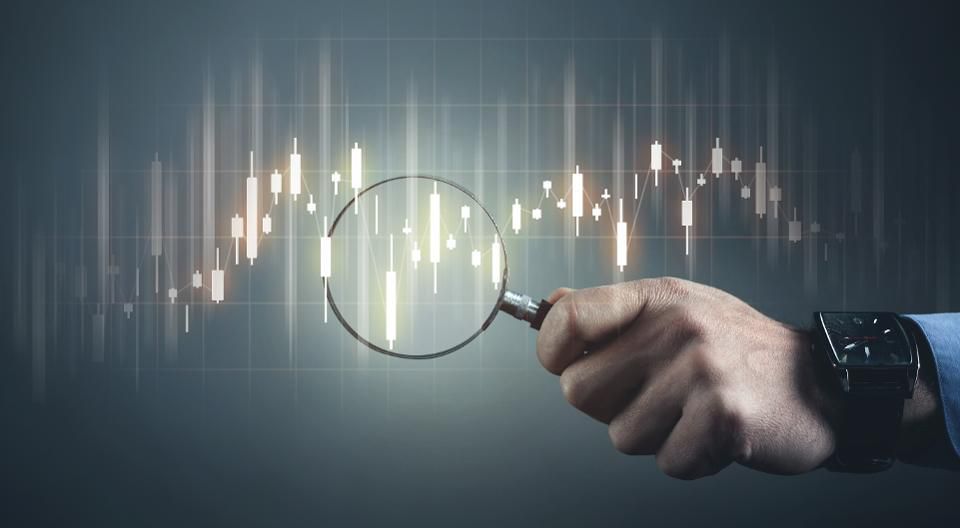 The stock markets have had a big rally since the plunge that ended on Christmas Eve. However, money flows show no signs of significant investment buying. In fact, the chart below shows institutional investors selling during the entire rally of the first two months of the year.

So, who has been doing the buying to drive stocks higher? Manipulation by the HFT? 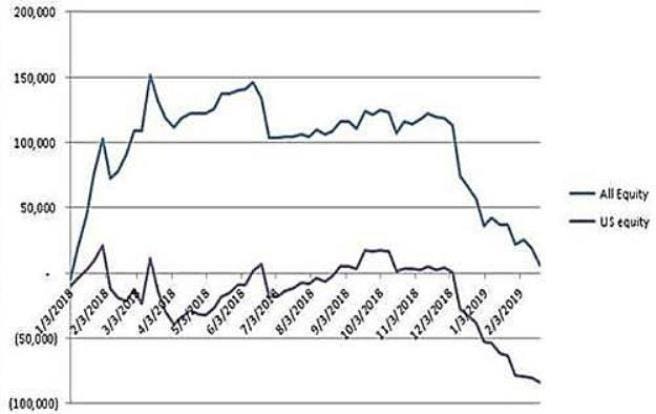 In our award-winning Wellington Letter, we explain that the trigger for the rally until recently was massive short covering. In February, buybacks, which we call “financial engineering,” started again supporting stock prices a little longer.

We have been very cautious during the rally, after advising to close out shorts in our trading services on January 4, which was beautiful timing. That was 6 days after the start of the rally.

The major indices are now in important resistance areas. This coincides with the second highest valuation (P/E) for the S&P 500 over the past 6 decades. The only higher P/E was in 1999, the ridiculous tech bubble when even stocks without sales, not earnings, were soaring. Any successful investor would not buy at the highest valuations in 60 years. Here is the chart: 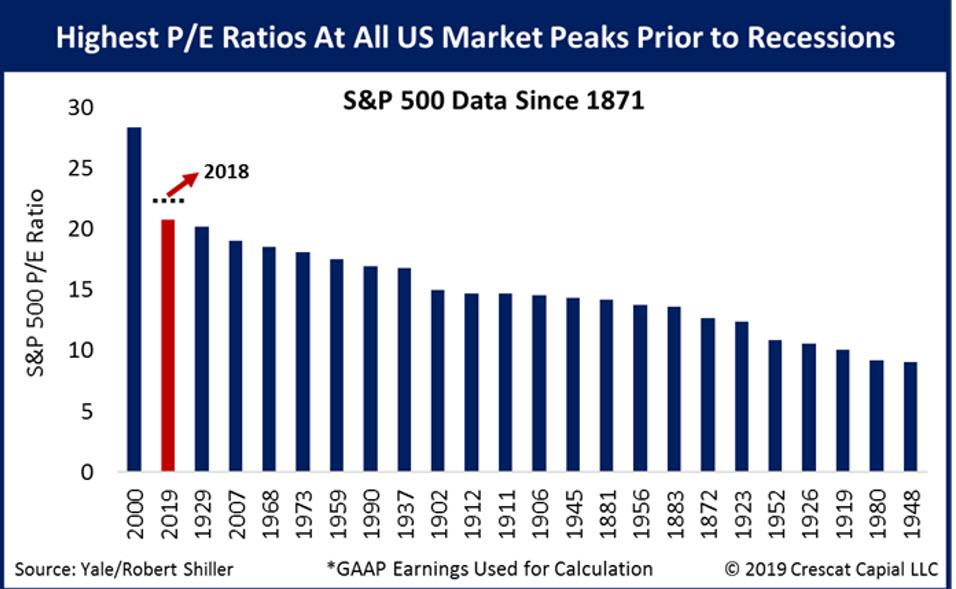 At the same time, earnings estimates of analysts are plunging. Think of what that means! At the highest stock price valuations in history, earnings are now expected to plunge. The FOMO (fear of missing out) crowd is ignoring this.

The chart below shows the earnings expectations for the first quarter of 2019. (Chart courtesy of Factset). Analysts expect earnings to decline by 4.1%, but the stock market has risen. 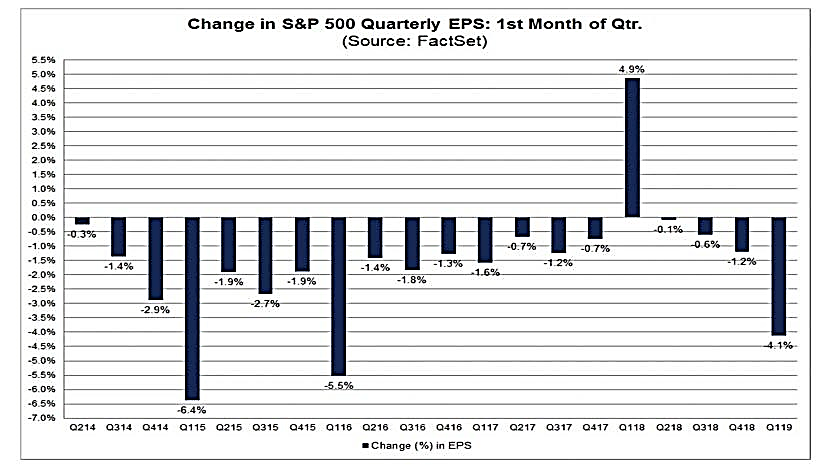 To justify this huge divergence, bullish analysts say that the Q1 earnings plunge will be reversed in the next quarter.

The bulls conclude that the more dovish statements of the Fed in December would refuel economic activity. But those were only words from the Fed about being cautious about further rate hikes. It was designed to remove the fear of further rate hikes.

The Fed hasn’t even started cutting rates. In previous cycles, the start of rate cuts is more closely related to the worst part of the recession and the bear market.

Regarding the economy, Goldman Sachs (GS) forecast is that after a weak first quarter, economic growth will start accelerating again. Magic! They should discuss each one of the drags on the economy this year and tell us why they are not important.

The current earnings forecast of Wall Street is for a 15% slowing in earnings growth. Yet have acted the past two months as if earnings would accelerate by 15%.

For investors, the earnings recession is much more important than an economic recession. The common perception is that earnings drive stock prices. At Dohmen Capital, we have a different opinion. Why then do sectors like biotech, where the vast majority of stocks have no earnings, do so well in bull markets?

It seems to us that future earnings expectations may be a better correlation. And if that is for 15% decline in growth, wouldn’t that mean at least a 15% decline in the markets. But markets always overshoot, on the upside and the downside.

After the recent rally, stocks are again very overvalued, similar to other important tops. That means that in a decline, the market will first eliminate the overvaluation. And then it goes to undervaluation. That process usually takes 18-24 months.

And that’s when we want to load up on stocks, not before.

Let’s look at the last crisis in 2007. For those interested in reading how we predicted that crisis, read the book “Prelude to Meltdown” written in 2007, or “Financial Apocalypse,” a step by step account of how we interpreted the market and the economy in the crisis year of 2008.

We had caught the October 2007 top within 2 days in our Wellington Letter, calling it a bull market top. As it turned out, it was.

The Fed continued to try to stimulate, pushing more and more liquidity into the system, but the deterioration continued. The stock market had one more rally from March 2008 to mid-May 2008, which fooled perhaps 90% of all analysts. But new highs were not made.

And then the long, accelerating slide started into the financial crisis, while the Fed was becoming ever more aggressive in its stimulation efforts. Here is the chart, courtesy of thechartstore.com 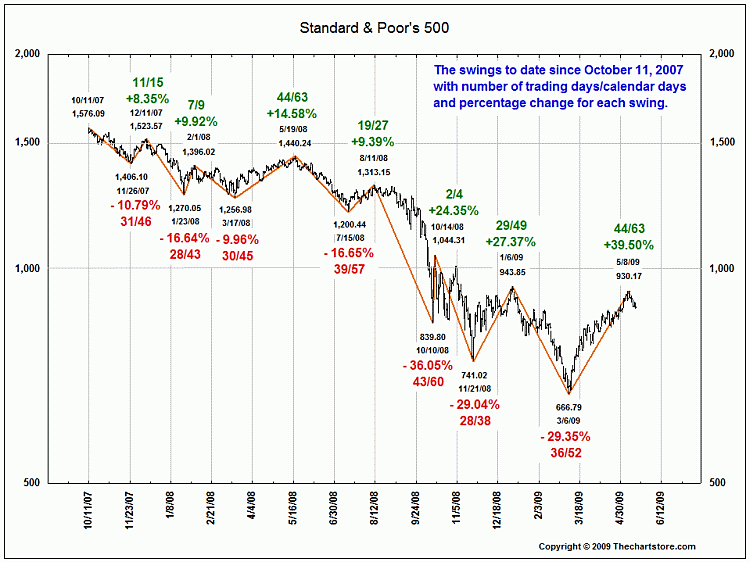 The bear market didn’t really get recognized by most investors until late summer 2008. The entire time from October 2007 to August 2008 saw “distribution of stocks,” which means that the big, smart money was selling into all the buy recommendations from Wall Street analysts. The big money knew how credit markets, which are so much more important than stocks, were deteriorating.

We called that to the attention of our subscribers in every issue of our independent research services, while “buy the bargains” was the advice from the financial media.

And then came the crash in September 2008. Our subscribers had a great opportunity to make huge profits with the inverse ETFs we had recommended, an average 72% in 5 ETFs in just 6 weeks.

It’s important to note from the 2007-2008 actions that the Fed’s sudden turn towards stimulation didn’t resolve the credit market crisis. It continued to worsen. The bankruptcy of Lehman Brothers occurred on September 4, 2008.

One year of Fed stimulation didn’t prevent that crisis. The Fed had gotten “behind the curve,” as pilots call it, and it resulted in a crash.

Our Current View: The markets are seemingly pushed upward by vapor. Valuations are sky high, volume is declining, exposing a demand vacuum underneath the prices, and there are no signs of significant investment buying. Historically, these are not conditions when buying is rewarded.

There are many signs suggesting that the markets have undergone a “pump and dump” operation the past two months.  That means, as earnings decline, manipulations by the HFT and algo-trading outfits keep pushing stock indices higher. All fundamentals are being ignored.

In a ‘pump and dump’ operation this continues until the market or stock is as vastly overvalued as in the year 2000 and 2008. During the final phase, the big, smart money starts implementing big short positions as in September 2018.

Then the plug is pulled and the manipulators make big profits in a plunge or crash.

However, be aware that often, after the initial plunge, there is another rally back to confuse the naïve money managers who don’t know technical analysis.

Below is the NYSE Composite, which we also consider more relevant than the S&P 500. Note that it is now at strong resistance.  The TSV (time segmented volume, from Worden) has not confirmed the recent bounce back to resistance. That’s a negative. 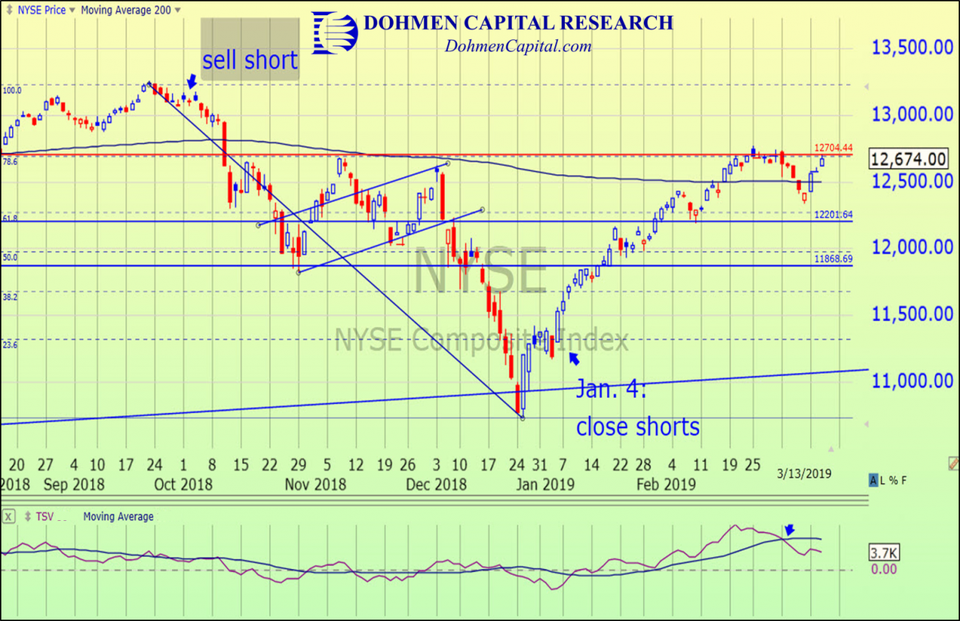 For investors who are not familiar with chart analysis, let’s look at the fundamentals. The stock market was in a downtrend going into the 2016 presidential election. Clinton was the favorite and she was deemed to continue the policies of the president at that time, which were disastrous for business.

The election of 2016 brought an immediate upturn in the stock market although the new president had not yet been inaugurated. The two years that followed had a great economic and stock market recovery. Yes, politics do matter!

But the election of November 2018 ended that. The stock market had one of the worst Decembers in history. It appears that investors consider the new leadership in the House negative, and a return to the anti-business policies of the prior eight years…or worse. This is not a political statement! It’s reality.

An economic recession and a stock market plunge would not only be immensely profitable to the big manipulators, but also remove the great achievements always mentioned by the current President. The admitted goal of the radical Dems is to destroy his chances for reelection.

Several billionaire hedge fund operators recently had quiet meetings in NY to convince left wing members of Congress to start impeachment proceedings against the President. Now the collusion between the stock manipulators and the radical politicians has been cemented.

The hedge fund billionaires will aim to simultaneously make huge profits in the process by selling short. The losers: innocent investors and all decent Americans. When the billionaires collude with the radicals, the outcome is never good for the average person.

We often hear from the bulls that the Fed would prevent a credit crisis. Our reply: they have always tried, but never succeeded. From the 2007-2008 example above we can see that once a credit crisis has started, the Fed doesn’t stop it.

All my work says that the two-month rally at the start of this year was just like the typical “pump and dump” manipulation of many investments we see continuously. Investors are first attracted into stocks with the “pump,” which is an eye-catching rally. And then stocks are ‘dumped’ when the bull trap closes.

However, this current operation will be worse and last longer than most because of the political  agenda.

The stakes are as high as can be. It involves the long-term future of the United States. Socialism, aka communism, is at the door. They don’t knock, but just barge in and declare, “I am the boss” as a young Congresswoman recently did. Earnings and company news will be unimportant during this episode. Look at Venezuela, once the richest nation in South America, now a socialist hell where people are starving.

However, there is a flicker of hope. History shows that when those situations look the bleakest, as they did in the final years of Jimmy Carter, true Americans come to the rescue, bringing a big change to the positive. It was Reagan in the U.S. and Margaret Thatcher in the UK who made the big turns for their nations. Could that occur in 18 months from now?  True Democrats may take back control of their party from the radicals. We will see.