Home » Gold is Soaring to Record Highs – Is Gold in the Midst of a 30-Year Bull Market?

Gold is Soaring to Record Highs – Is Gold in the Midst of a 30-Year Bull Market? 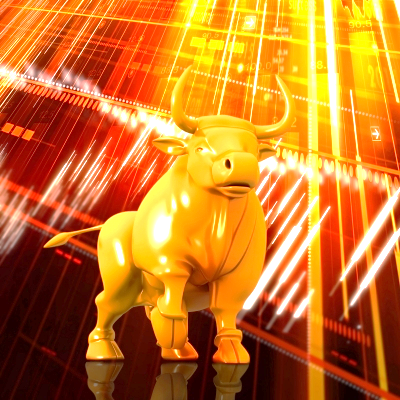 The FOMO mentality which has taken hold of the stock market in recent months has now made its way into the realm of precious metals. At the time of this writing, gold prices have seen a meteoric rise, climbing up to the price targets we set earlier this year and then exceeding them.

Gold has now soared past its prior all-time highs around $1930/oz., originally set in 2011, to trade above $2000/oz. In fact, gold futures contracts have completed an amazing 13-day winning streak, and have surpassed $2020/oz. in intraday trading.

Even while some of the major stock indices have staged record-breaking rallies of their own, gold has climbed much higher in percentage terms than even the tech-laden NASDAQ, which defied expectations in June after soaring past its pre-pandemic high: 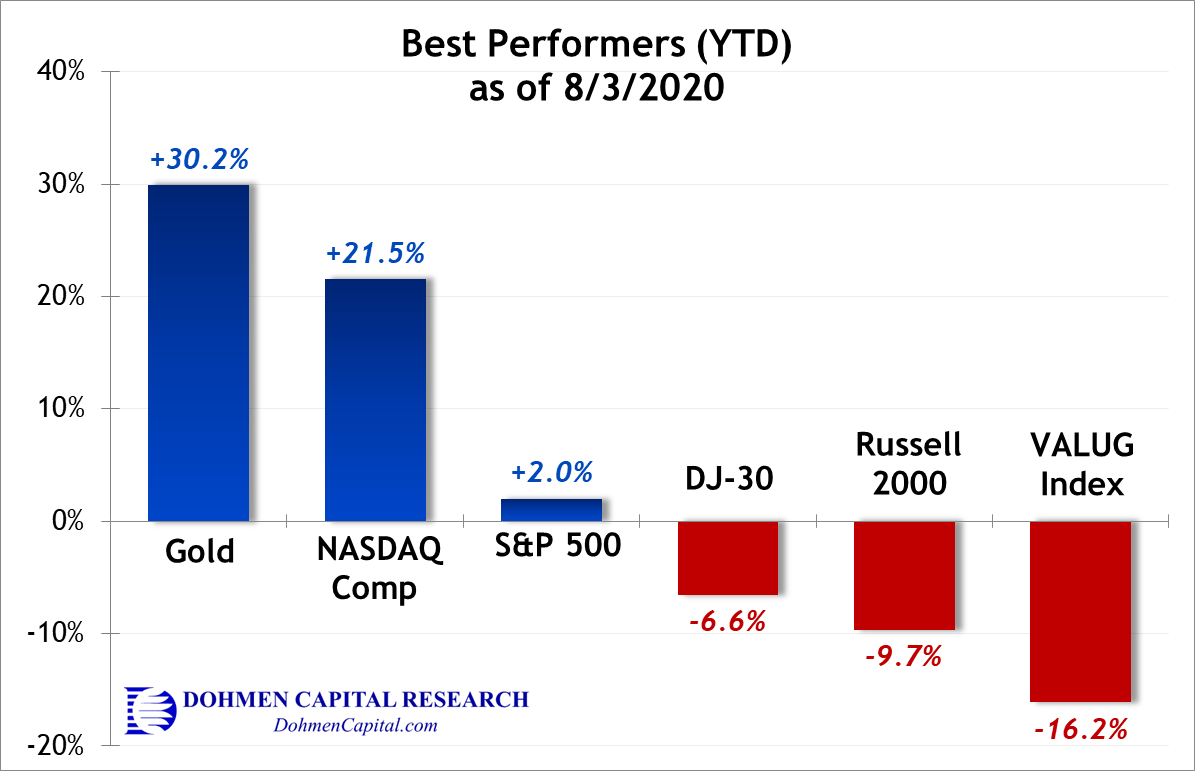 The narrative surrounding gold as an investment has dramatically changed in a short period of time. Only a year ago, the financial media readily dismissed investments in gold. Warren Buffett chimed in with his annual letter to shareholders last year as he notoriously claimed gold has no real value.

Now, however, gold is making daily headlines, and thanks to falling interest rates and the declining U.S. dollar, the case for holding gold seems to only be getting stronger.

What should investors new to gold make of all this? In 2020, it is more important than ever to have a different approach towards gold since the gold markets behave in a fundamentally different way than the stock market.

The 2020 Crash and a Great Buying Opportunity

As many unfortunate gold investors learned in February and March of this year, gold is not a crisis hedge and will not protect against losses when all markets crash. When large firms and retail investors scramble for cash, they will liquidate all their positions, precious metals included.

We explain in our new report on gold tat while gold did significantly outperform the S&P 500 during the market turmoil in February and March, losing only about 15% as opposed to the S&P’s 35% plunge, cash was clearly the best asset to have. For some investors, who had been holding gold prior to this point as a crisis hedge, this year has been a rude awakening.

However, once the panic selling was over, a great buying opportunity emerged as investors saw a newfound opportunity for precious metals in their portfolios.

Much like they did in 2008, central banks stepped on the monetary accelerator, purchasing massive quantities of securities in order to prevent a liquidity crisis and help stabilize (and stimulate) the financial markets.

Investors who understood gold’s true value as a hedge against inflation and currency risk were eager to buy in. Textbook economics would suggest that unprecedented new levels of monetary supply will erode the value of the dollar, making precious metals far more attractive as a safe store of wealth.

But how fearful should we really be of a hyperinflationary episode? We provide our latest analysis on this topic and many others in our latest research report on gold.

Our Outlook on Gold Prices

Our research reveals striking parallels between the current chart of gold and the one we saw in when it set its previous record high in 2011. It is important to remember that the last time gold prices reached new all-time highs, they suffered a big 20% plunge shortly after.

Gold is now trading at new all-time high levels as the RSI has continued to push higher into “overbought” territory. This is eerily reminiscent of the setup we saw in 2011, the previous all-time high for gold. This tells us that the risk/reward is not in favor of the gold bulls at this point. 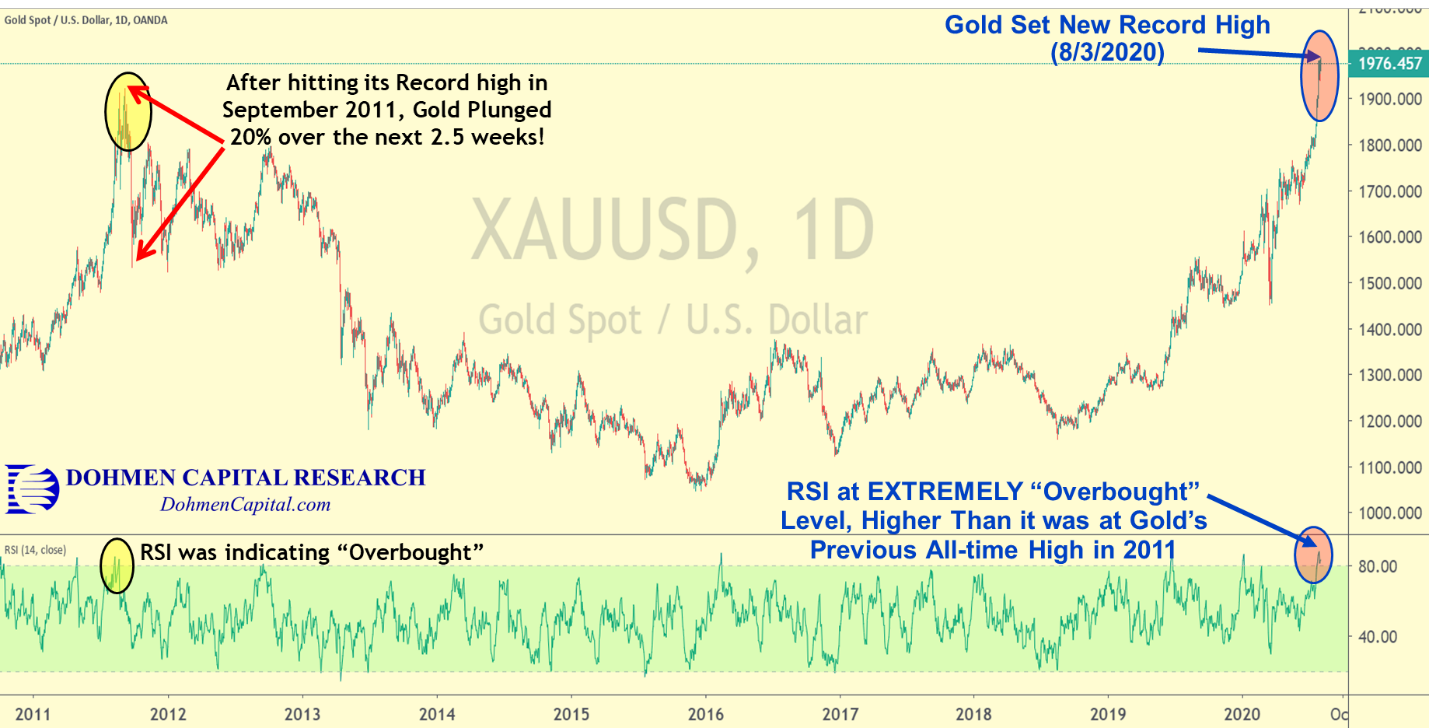 However, our research goes all the way back to 1977, when we first performed a cycle study on gold prices. The study suggested a 20-year bear market which ended in 2001, exactly when prices bottomed out, which would be followed by a 30-year bull market cycle. If this research is correct, the longer-term prospects for gold remain positive.

Gold is one of the trickiest markets we know, which is why we’ve made our latest in-depth analysis of this market available in our Special August 2020 update to our Gold Report, “Why Gold Could Rise for the Next 10 Years.”

This exclusive report builds on research that we began last year when we first saw signs that gold was ready to climb higher.

Get your copy of our latest report today to learn why Gold has rocketed to new all-time highs recently, the most important factors for Gold right now, our analysis on the longer-term and shorter-term trends, the similarities we see between now and when Gold hit its previous record high in 2011, and key price levels to watch on Gold.