Home » Let’s Not Make The Cure Worse Than The Disease

Let’s Not Make The Cure Worse Than The Disease 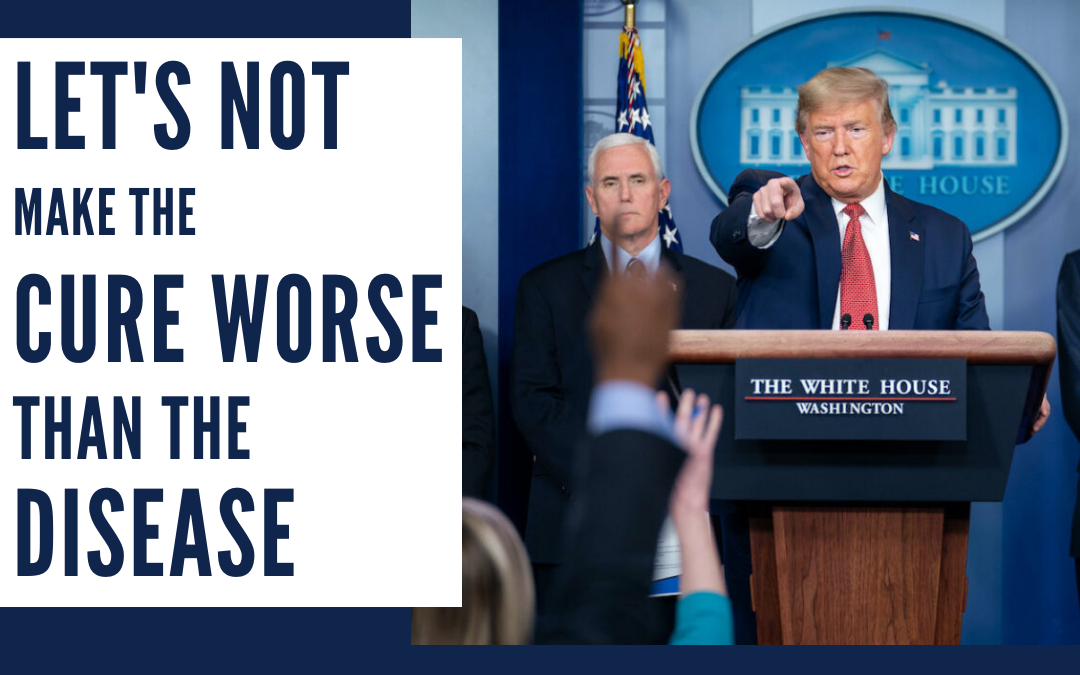 “Let’s Not Make The Cure Worse Than The Disease”

So says President Trump. And he is taking action.

President Trump announced his plan to force the opening of the country on Thursday, April 16. Americans are lucky to have such a decisive president.

We were researching for some simple numbers on COVID, but surprisingly can’t find them anywhere. One is the simple number of COVID deaths in the 9 states where people are not ordered to be confined to their homes.

This data should be easy to get, as that could be significant information.  Certainly it’s a number Dr. Fauci of the NIH should have. Yet, Dr. Fauci does not mention it.

States That Are Open:  Iowa and four other states — North Dakota, South Dakota, Nebraska and Arkansas — as yet have no state-wide “stay at home” orders. Seven states — Wyoming, Utah, Texas, Oklahoma, Missouri, Alabama and South Carolina — have at least one city with shelter-in-place rules.

South Dakota, which has a great governor (GOP) didn’t close the state. The major media seems to have a campaign against her for that and now call the state a “hot bed of outbreaks.” Wow! The number of infected and dead must be in the thousands. No, the state has 7 deaths (seven).

And those deaths are primarily in the meat packing plant in the state, which is labeled as essential as it produces food.

Nebraska, an open state has 25 deaths, Iowa has 43, North Dakota has 7, Wyoming 2 deaths, Arkansas 37, Utah 21, and so on. More people have probably died walking across the street during that time.

Think about those low numbers. Americans are being imprisoned in their own homes because some people die, fewer than from the flu.

For a scientist, such data would be so important. Comparing states that closed down with those which didn’t could tell if causing an economic depression is worth the effort.

This is what scientists would do. But the chief Dr. Fauci doesn’t appear to know the numbers. Or does he know them and doesn’t want to reveal that the open states have far fewer deaths?

Furthermore, why are we not given the number of people who recover from COVID?

Calculating from published numbers this could show that 99% of people recover. That would show people that the hysteria caused by the media and politicians was in error, or a hoax.

Sweden is always used by socialists in the U.S. as an example of socialism succeeding. One thing wrong with that: Sweden doesn’t have socialism.

Sweden has not given in to pressure from other countries to close down the economy. Has the number of COVID DEATHS skyrocketed in Sweden? No, it’s somewhat higher than neighboring Denmark, which did close the economy. But Sweden’s economy is not in a depression.

An article in Vanity Fair said:

“With unchecked spreading of the virus, a country could expect to see a mortality rate that was 10 or 100 or 1,000 times higher than that of a country with strict controls in place.

Look at the very low mortality rate. Maybe we should all move to Sweden. They seem to have smart leadership.

Dr. Fauci of the NIH was recently on Laura Ingraham’s show on Fox. Fauci and his friends always talk about waiting “until a vaccine is developed.” Yet, the fastest vaccine produced was against Ebola and guess how long that took… 4.5 years!

No Dr. Fauci, we need a remedy, not a vaccine. One remedy used very successfully in Germany is Hydroxychloroquine, an anti-malarial drug that’s been around for 60-70 years. It has almost no side effects, contrary to what Fauci says. It is defamed and called “unproven” in the US, although the President of the USA is in favor of it.

Fauci had to admit that there still is no vaccine against HIV after 35 years, or even against SARS, which too is a coronavirus. He said they had been working on a SARS vaccine, but then SARS “just disappeared.”

Amazing that he would admit that. That raises an important question: could COVID disappear?

SARS is very closely related to COVID. In fact, the name for COVID-19 in Germany was SARS-CoV-2. In other words, a variation of SARS.

We ask, was SARS developed as a weapon, the first version tested years ago, but it wasn’t contagious enough. So they came up with SARS-CoV-2?

In January our research of the foreign media showed that the Wuhan Virus (COVID) was man-made. We wrote about that in our Wellington Letter of January 26, when Dr. Fauci was still saying the Virus is nothing to worry about for most Americans.

We wrote it looked like the virus was made to be highly contagious, but not more deadly than other diseases. Now we see that according to doctors, the mortality rate is below that of the flu.

Today a very important article on zerohedge reports that a Nobel Prize winner and discoverer of the HIV virus says COVID is “man-made.”

When others wrote that weeks ago, it was called “Conspiracy Theory” by those who don’t want anything negative reported about China. Now we have a noted Nobel Prize winner saying it. Will he also be smeared?

“Professor Luc Montagnier, 2008 Nobel Prize winner for Medicine, claims that SARS-CoV-2 is a manipulated virus that was accidentally released from a laboratory in Wuhan.”

“With my colleague, bio-mathematician Jean-Claude Perez, we carefully analyzed the description of the genome of this RNA virus,” explains Luc Montagnier, interviewed by Dr Jean-François Lemoine for the daily podcast at Pourquoi Docteur, adding that others have already explored this avenue:

“Indian researchers have already tried to publish the results of the analyses that showed that this coronavirus genome contained sequences of another virus… the HIV virus (AIDS virus), but they were forced to withdraw their findings as the pressure from the mainstream was too great.”

The positive aspect of Dr. Luc Montagnier is this:

“The altered elements of this virus are eliminated as it spreads:

“Nature does not accept any molecular tinkering, it will eliminate these unnatural changes and even if nothing is done, things will get better, but unfortunately after many deaths.”

That could mean that COVID could suddenly stop being so contagious and could slowly disappear.

The major mainstream media has banned articles like these as they don’t fit the “agenda.”

Our Special Bulletin Wellington Letter of January 26, 2020 discussed the investigative article that disclosed all of this, including the man-made variation of the DNA of the virus. Look at that date: the information has been available for three months!