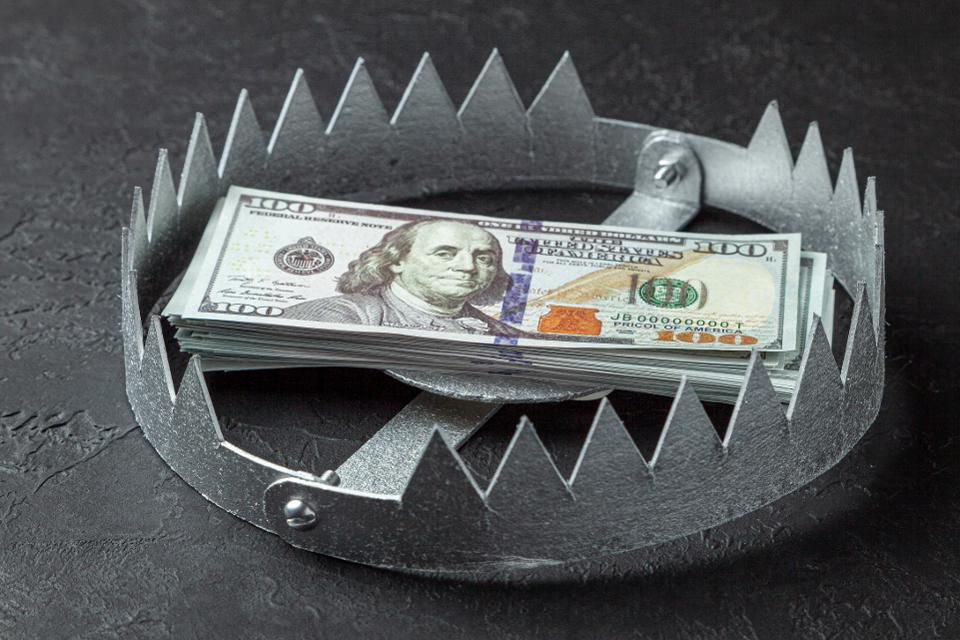 The market plunge in May shocked the bulls. By many measures, it was the most severe decline this year and even over the past several years.

On April 30, when bullish sentiment in the media was very high right after the eventual top, we wrote, “We would increase exposure on the short side” in our trading services, Smarte Trader and the Fearless ETF Trader.

The next day, May 1, we suggested adding to short positions, writing, “We believe the bearish case will reassert itself this month. We are positioned for that.”

With our bearish exposure in place, we successfully rode that decline all the way down into the June 3 bottom, profiting nicely over that time.

On June 4, after the devastating market plunge of May, we advised our clients that a good rally was immediately ahead. 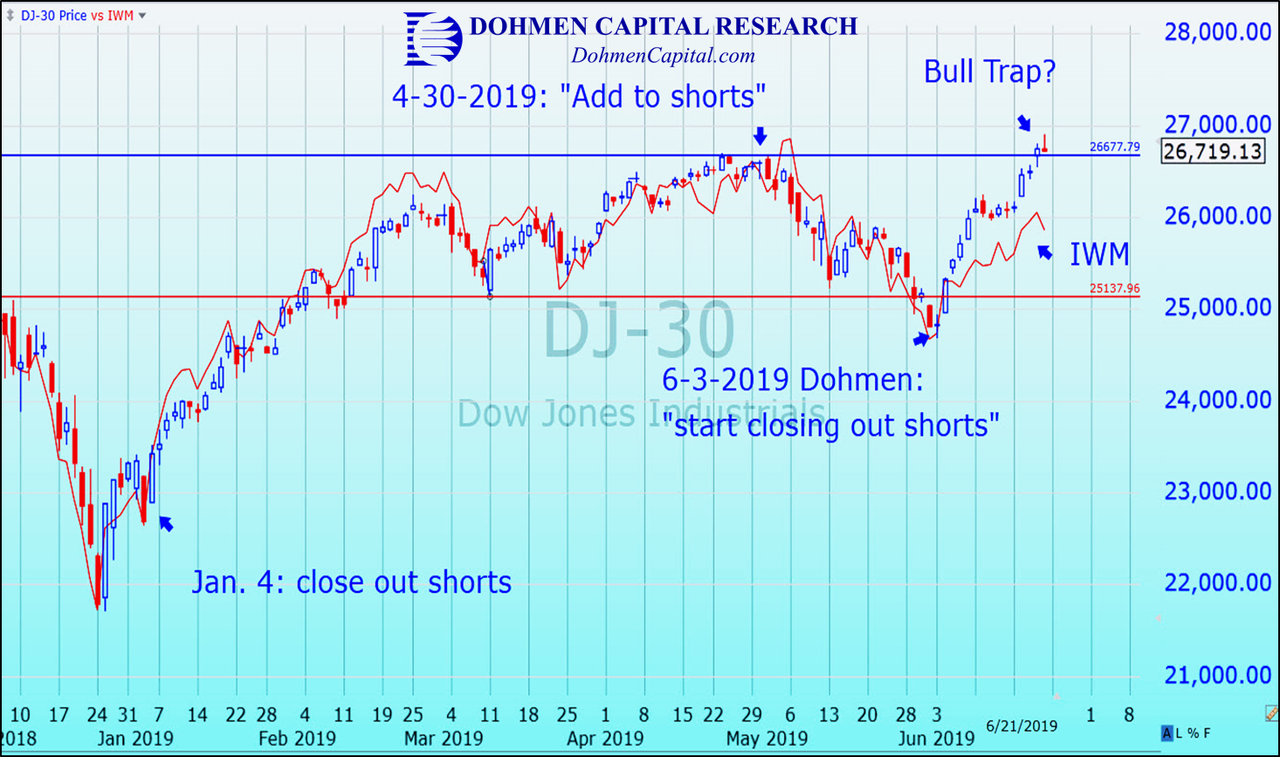 We wrote on June 4, after having been advised to close out our short positions the prior day:

…our work suggests that it is possible for the DJI to make a brief new all-time high, not confirmed by the other indices. Fed chairman Powell made a statement earlier this morning suggesting that it would perhaps be open to a rate cut this year if the tariffs slow the economy more than expected. Late last year we predicted they would do this in 2019.

And Fed Vice Chair Clarida said tariffs would not raise inflation as it is a one-time event, thus hinting at a benign Fed policy.

Then Bank of America CEO Moynihan made a very positive statement on the US economy.

All these well-coordinated statements signals that “the fix is in” to rally the markets. The PPT is very active now.

We can only conclude the same as on February 11, 2016 when there was a concerted effort to stop a big market decline and 7 month bear market in small caps. Several Fed governors made bullish statements along with a well-known bank CEO.  On that day, we wrote: “the fix is in” and we recommended closing out shorts after that mini-bear market and buying.

In our Special Bulletin of June 8, we wrote:

The big announcement today, Saturday, was an agreement with Mexico.

We had expected that for this weekend. Another victory for the US President!

We explained that there were other reasons for turning bullish for the near-intermediate term:

“We are clearly now in the phase where poor economic news is good for stocks.

Reason: it will cause the Fed to cut rates, perhaps several times this year.

The consensus opinion at this phase in the market cycle is that such rate cuts will be good for the economy and stocks. History shows the contrary.

When the Fed cuts rates, it is usually the start of the serious part of the bear market.

You may ask why? It means that conditions are deteriorating fast enough for the Fed to become very concerned. But the Fed is always “behind the curve,” i.e. too little, too late.

Furthermore, it takes from 12-18 months for Fed monetary policy to have an effect. That means that we are now starting to see the effect of the rate increases going into 2018. The benefit of rate cuts wouldn’t show up until perhaps late next year.

China will be another positive event this summer. President Xi Jinping of China said at a conference in Russia that Trump is his friend and they will work together to resolve differences. Putin also made friendly statement about talking and resolving any problems.

This is extremely important ahead of the meeting at the G-20 later this month between Trump and Xi. It could mean that there will be a deal.

Combine that with the awakening of the economic establishment that the economy needs help and the Fed realizes that its policy has been very wrong again, and we may get rate cuts in July and September.

Late last year we wrote that the next move by the Fed would be to cut rates, not raise them.”

The above comments and chart should be reviewed several times because they are not what you normally hear from analysts, whether on financial TV or on various websites.

It is important to use a method of analysis that tells you immediately when a market turn is likely, within a day or two. In this case, there were several sudden bullish reasons: Mexico, China, and Fed policy were all confirmed by our money flow technicals.

Now that we had the rally, and analysts are very enthusiastic, is it time to become cautious once again?

At this writing, June 21, the S&P 500 has fulfilled our forecast of a new record high while the DJI was very close to setting its own high today. This shows how “active investing” can enhance your portfolio performance versus the outdated “buy and hope” strategy.

Wall Street always tells you that “no one can time the markets.” We have proven for 42 years in our Wellington Letter that this is simply false.

Why do they say it? Because Wall Street needs the public to hold the stocks in a bear market all the way down because someone has to own them when they don’t want to.

Here is the chart of the S&P 500 (500 stocks, candlesticks), which just hit a record high, versus the IWM, the ETF for the small cap RUSSELL 2000 index (2000 stocks, thin red line). Note that the latter is substantially below the level of its previous high. 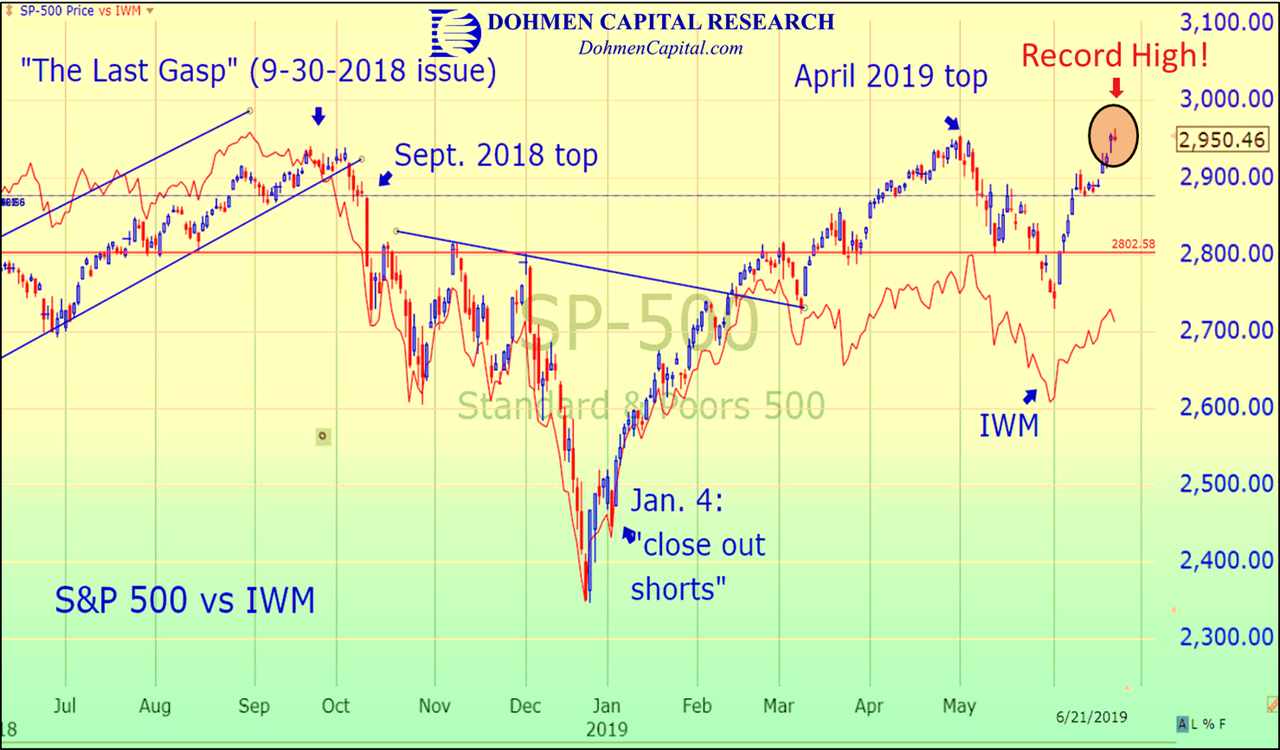 And now, are you ready for this shocker?

The entire “Trump Bull Market” was wiped out in December 2018, without any publicity. Technically speaking, that is a major long-term problem for the market.

Below is the chart of a much more important index to show the true state of the market, the Value Line Index (VALUG). It consists of 1660 stocks versus only the 500 stocks in the S&P 500. It is not capitalization weighted, giving each stock the same significance.

Note on the chart below that in December 2018 the VALUG index broke through the 2016 level when President Trump was elected and the big market up-move got under way. That shows the Trump Bull Market was wiped out last December.

However, the stock rally in early 2019 got the VALUG above that level once again. But then during the May plunge, it broke down through the 2017 Trump Inauguration level, as it previously did in August 2017 and once again in December 2018. In technical analysis this is very significant.

The VALUG is still a distance from making a new high. That shows that in spite of all the bullish sentiment, internally the broad market is lagging significantly.

That means that the June rally could just be a technical bounce. 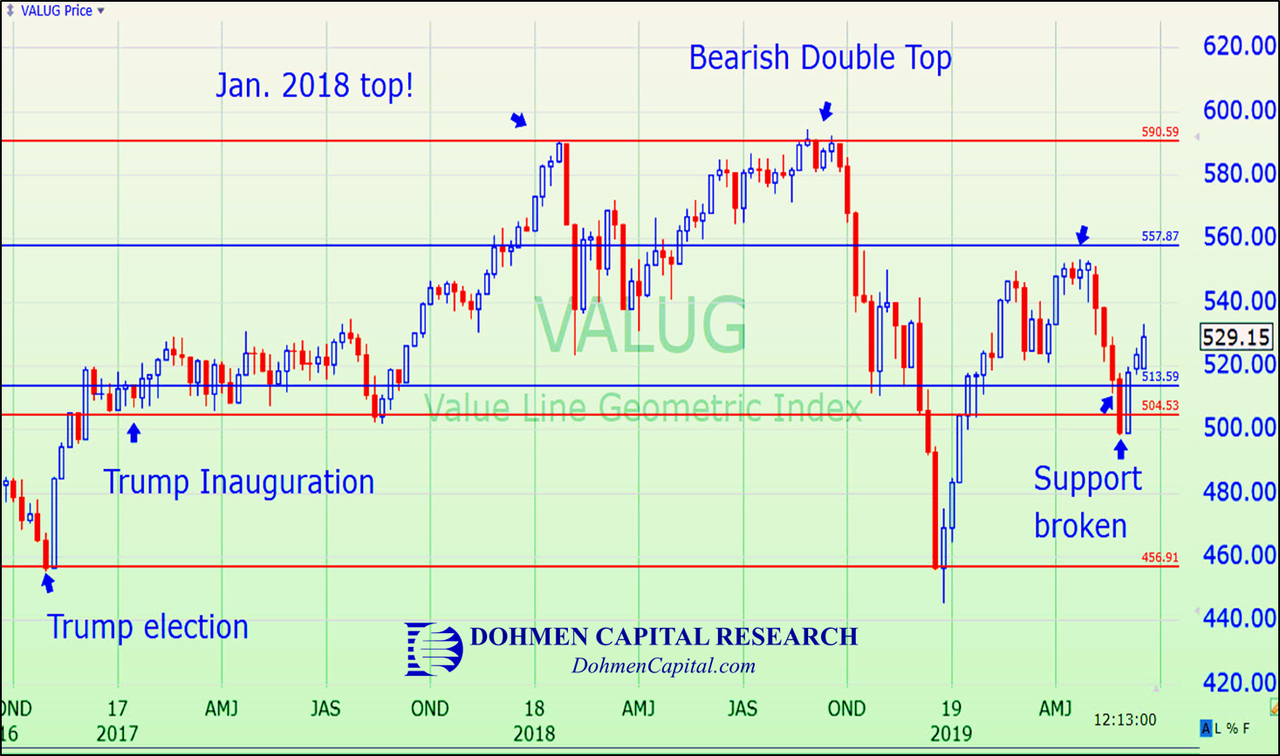 GOLD: At this writing, Gold gained around $40 in two days. This confirms the value of our bullish Special Gold Report published just before the latest rally.

Those who followed our analysis and forecasts have had a chance for great portfolio gains with the mining stocks and the precious metals. You can get your free report at DohmenCapital.com.

The Fed made very dovish comments this week, convincing analysts that there will be rate cuts this year. This propelled the yellow metal to new 5-year highs.

CONCLUSION: At important times, it pays to look beneath the surface and see what is truly happening in the markets with the majority of stocks, not just the stocks talked about on TV. That’s what we do.

You want to turn a deaf ear to the bullish analysts who have a great conflict of interest. A person who manages money or works for Wall Street obviously cannot say he is bearish: it is bad for business and bad when trying to attract new clients.

In our business, we have no conflicts. We can say “sell” as we have done ahead of each significant market plunge in 42 years.

Our advanced technical analysis has allowed us to show our clients how to position themselves for great success in bear markets and even intermediate-term declines.

In our opinion, the old “buy and hold forever” advice is a prescription for great pain during a bear market, which may not be that far away.