Home » The Big Turn For The Markets

The Big Turn For The Markets

According to my work and technical indicators, the eye-catching last up-move of some indices, such as the DJI, had all the signs of the final “bull trap.” In fact, the headline of my last Wellington Letter (published September 30) is The Last Gasp?

I warned about the glaring bearish divergences in the stock market for the past several months and especially the last part of September. This looks so similar to other important market tops. 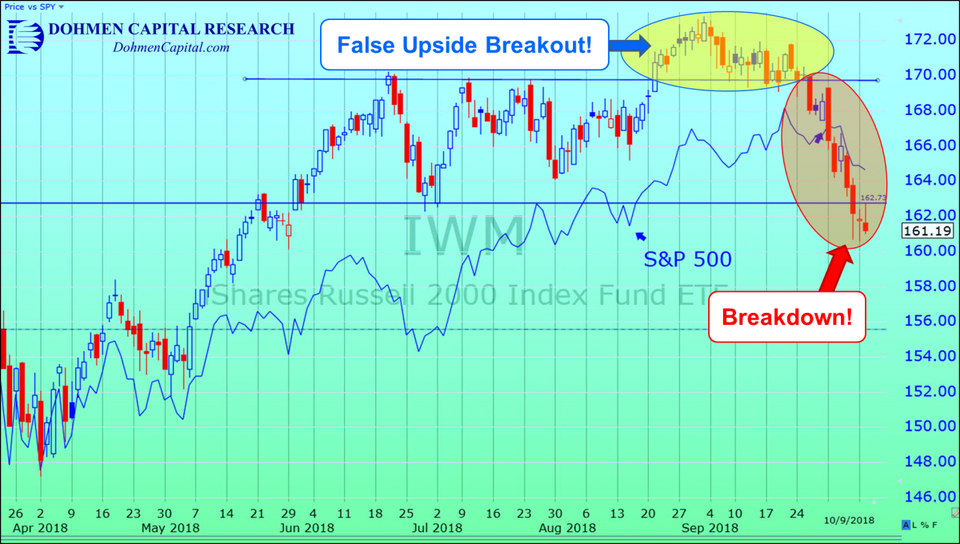 The FAANG stocks (Facebook, Amazon, Apple, Netflix and Alphabet), which accounted for almost all the gains of the S&P 500 this year, had been manipulated upward all year to give the impression of a strong market. They were used to push indices higher, while the majority of other stocks were sold. These stocks are now also being sold and will give up a good part of this year’s gains.

Now it is their turn to “adjust” to reality, and I believe the social media stocks, including Google (Alphabet) and Facebook, will be shunned. People, and thus the Congress, are tired of their dubious business practices. These firms now have the huge problem of “trust” as several commentators have noted. They were the heroes of the past years. Now the heroes will be thrown to the wolves as is typical when the social mood changes.

At this writing, the sudden sharp decline on October 4 was when the “bull trap” closed.

Subscribers to our services got our warnings over the past several weeks. At the low on October 4, the DJIA was down 356 points. This was the “prelude.”

All the money managers who were lured into the market the past several months are probably sitting with many stocks under water. It is human nature not to sell a stock that has a loss. Big mistake! The first loss is the best loss.

The very broad Russell 2000 index, which is thought to be rather immune to trade tariffs, is now at the lowest level since May this year. This suggests that most of the stocks bought since that time are now being held at a loss. That’s about 2,000 stocks, many more than the 30 stocks in the DJIA and the dozen or so that have promoted the S&P 500.

Now all these money managers will be waiting for a rally to erase those losses, so they can “get out even.” This selling causes rally attempts to fail.

Then the decline usually starts accelerating. This could rapidly turn into a painful experience for bulls. But it should be very profitable to short sellers of stocks or those who know how to use the inverse ETFs.

Bond prices have plunged, erasing over $1 trillion of investor wealth in just four days. Yet analysts fail to see the real reason for the plunge. They think it’s the strong economy. Wrong!

It’s the rise in rates because of Fed policy. The big, smart money thinks this will be another big mistake by the Fed, which has a habit of hiking rates “until something breaks.” This is setting off a scramble to unwind the very highly leveraged derivatives and carry-trades, where leverage of 4:1 is at times used. That means a small rise in rates can wipe out much of the equity in the trade.

At this phase in the cycle, with a topping market, earnings are irrelevant because they reflect the past. What is important is stress in the credit markets. And that is occurring now.

As a result, the emerging markets had their worst week since March of this year. Rising rates, deteriorating markets, but most of all, the rising dollar, have a “triple whammy” impact on emerging markets stocks.

Over the past few weeks a number of high profile analysts had recommended emerging markets. I have warned all year to stay out or go short these markets, since they are the most vulnerable.

Until this week, there has been good demand for higher yielding lower grade bonds and risky leveraged loans. Investors who buy them are not aware of the big risk. But that boom has probably ended. In Europe, five new issues of junk bonds had to be cancelled because of lack of demand.

In its Global Financial Stability Report of April 2017, the International Monetary Fund (IMF) said that in the next recession, 20% to 22% of U.S. corporate bonds would default. That would be huge.

Meanwhile, 30-year yields touched around 3.43%, the highest since 2014. Inexperienced analysts say, “don’t worry, it just means the economy is very strong.” That is conflicted advice from Wall Street aimed at preventing money managers from becoming bearish.

The repercussions of a lack of liquidity will be severe in all the markets. Why is that?

Foreign buyers of U.S. Treasurys hedge their exposure to currency risk. That has a cost. Until this week, the return would cover the cost. But now the cost of hedging has soared due to the rising dollar, and that makes the investment in Treasurys unprofitable.

That dries up the significant demand for U.S. Treasurys from abroad. Therefore, the T-bond market plunged this week.

Conclusion: The Fed’s plan to hike interest rates four more times until late 2019 is scary. My bet is that this plan will be interrupted by a credit market crisis. It is more likely that within a year we will see another QE (quantitative easing)..

The repercussions for stocks from what is happening in bonds worldwide are widely underestimated by analysts. This is highly significant, especially for emerging markets and stocks without earnings. Junk bonds will finally be shunned.

Currently the yield difference in the U.S. between junk and investment grade bonds is near a historic low. When the spread widens to levels in a deteriorating financial environment will cause a sharp decline in junk bond prices. And that will adversely affect stocks.

The majority of analysts still mention “the strong economy” as being bullish for stocks. But that is irrelevant at important turns. I have written many times, “watch the credit markets.” The important factor at an important top is “liquidity,” and liquidity will now dry up quickly.

Stocks will be sold to get cash. Thus, the turns in the markets could come very quickly.

At times like these, I look at the weight of the evidence, since no one has a perfect vision of the future. I know that procrastination in the face of the evidence usually causes great financial pain. But when the evidence changes, I will change with it.