Home » The Worst Is Still Ahead For Investors

The Worst Is Still Ahead For Investors

Is economic growth the cause of stock market growth? Is a recession necessary to cause a bear market? Is this a correlation that will allow you to get out of stocks in time?

Those are most important questions for investors that are always raised when bull markets are turning into bear markets and the turn has not yet been generally recognized.

Currently, investors hear that “only recessions cause bear markets.” That is incredibly false and perhaps intentionally deceptive.

I remember when a newspaper headline on March 29, 2007 read “Bernanke says no recession in sight.” This referred to Fed chair at the time, Ben Bernanke. The subprime mortgages were starting an avalanche of defaults. In my Wellington Letter, I rang the warning bells that a financial crisis was ahead.

A few months later I decided to write my book, Prelude to Meltdown, predicting a global crisis in 2008. Of course, now we know that is exactly what happened.

But it wasn’t until late summer of 2008 when Wall Street analysts became cautious. By that time, many stocks had already had severe plunges. The S&P 500 was down 23% by the end of July 2008 when analysts were still talking about “bargain hunting” because there was “no recession” in their opinion.

I have written for decades, “don’t confuse the economy with the stock market.”

A Forbes contributor, Jerry Bowyer, made a good analysis of the topic of “correlation” between stocks and economic growth (excerpted below). He points out that there are some significant problems trying to prove causation because of correlations.

He used the chart from Lattice Strategies of stock returns versus GDP growth. 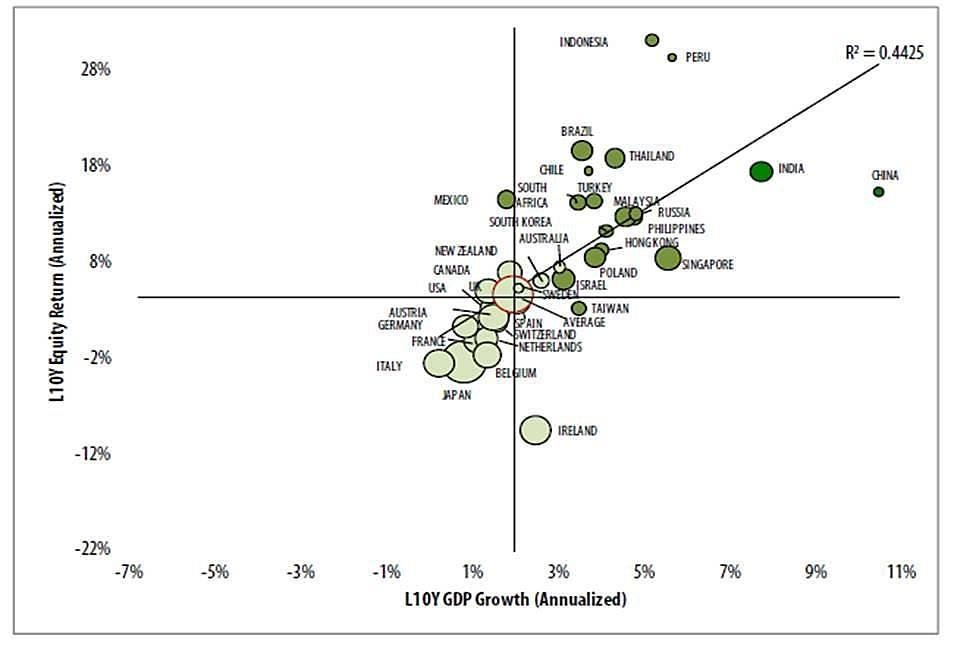 A cursory glance would suggest that strong economic growth (GDP) correlates with better stock market performance (equity return). Jerry Bowyer points out that the positive correlation is 66%, which is good.

But it certainly is far from proof and does not mean that one produces the other. One might also say that a stronger stock market produces a better economy.

For example, since the Trump election, the U.S. stock market has far outperformed the rest of the world. In late 2017 we saw economic growth picking up. Couldn’t one make the case that perhaps the higher stock market caused the economy to strengthen?

I wouldn’t make that case, but then, I wasn’t brainwashed in economics class. Two years of econ at the University revealed to me why economists have such a hard time being right. So often they get it wrong. I decided to get a degree in chemistry with a minor in physics although I had no intention of making science my career. That was a great choice for someone wanting to trade the stock market.

Over the same time period we can break the countries into quintiles (fifths) and rank them in terms of return.

The chart above shows that there could be a relationship between economic growth and stock performance, as the countries with the highest GDP growth also have the highest cumulative equity market return. An economist who is quick to jump to a conclusion would say, this is “proof of the causation.” A student of science, as I am, would ask, are there other factors that are the causation of both; economic growth and stock market growth? Yes, there are.

Jerry Bowyer correctly points out: “Lots of things are important when it comes to stock performance, and unfortunately a rather disturbingly high number of them are generally ignored by most investment analysts: religion (yes, religion), fertility, ethical corruption, moral corruption, property rights, soundness of currency, debt, tax progressivity, and size of government.”

I have written for decades that just because there is some correlation between two data sets, it doesn’t prove “causation.”

Remember the “Super Bowl indicator?” The theory was that a Super Bowl win for a team from the National Football League’s American Football Conference (AFC) foretells a decline in the stock market the coming year. It had a very good correlation. However, it would be difficult to prove any causation.

You can have good economic growth while stocks still go into deep bear markets. During the 1973-1974 devastating bear market, the Value Line index crashed 80%, while the earnings of the S&P 500 grew each quarter.

When at the end of the cycle, the central banks reduce liquidity, causing stocks to go down as they are sold as a way to get cash needed for other purposes.

At Dohmen Capital, we have used our “Theory of Liquidity & Credit” to successfully predict bull and bear markets for the last 41 years.

When liquidity is reduced, as it has been this year by the Fed, the stock market eventually weakens, but the economy has momentum. It may show perhaps 6-18 months of growth while stocks are plunging into a bear market.

Look at some of the favorite institutional stocks and their declines from their peaks just a few months ago.

A decline of 20% or more is normally considered a bear market for a stock.

By the time a recession is generally recognized, investors already have big losses in their portfolios.

At this stage in the cycle, not recognizing this can cost you a fortune. This is exactly what we have been explaining to my Wellington Letter clients since the January market top.

Ahead of the October plunge, stocks were very much overvalued, with the average P/E above 25 on the S&P 500. A “normal” P/E would be around 14. That suggests that perhaps a 35%-40% decline in the indices is necessary to “normalize.”

But major trends usually overshoot. That suggests that P/E ratios will go much lower than “normal” and the losses for most investors will be much larger. Many stocks may decline 50%-80% in order to get back to their “fair valuations.”