Home » Why Buffett is STILL Wrong About Gold

Why Buffett is STILL Wrong About Gold

It is well-known that Warren Buffet does not like gold as an investment. Investopedia writes:

Warren Buffett has been very vocal about his disdain for gold as an investment. He sees little to no value in it. What Buffett refers to as a lack of value results from a lack of usefulness. He once stated about gold, “It doesn’t do anything but sit there and look at you.”

Our opinion, and that of millions of people throughout history, reflects a different view. Gold is a store of value. Over the long term, its value is not eroded by central banks creating money artificially. In fact, in terms of paper currency, which is basically paper with ink slapped onto it, gold prices rise over the very long term. In 1975, gold was $35. Now, gold has broken out above $1800/oz.

In terms of gold, the house may cost the same as in 1960, using ounces of gold. That’s a store of value!

In 2019-2020 alone, the US central bank, the Fed, has nearly doubled the amount of money creation, increasing the money supply by over $4 TRILLION. This effectively lowers the true value (purchasing power) of each dollar outstanding by half. Eventually, if that money creation out of thin air is not taken back, gold will rise in price to reflect the dilution of dollars.

In our previous article about gold on ZeroHedge (published October 2019) titled “Why Buffett is Wrong About Gold”  we provided short-term and long-term forecasts for gold prices. We encourage you to read it again.

We upheld our long-term outlook that gold prices would continue to rise, in accordance with a 30-year bull market cycle that began in 2001. This turned out to be correct in the following months.

Since that article, we have continued to monitor price action amidst the emergence of the COVID-19 pandemic and updated our guidance for gold investors now. Gold continued its climb through late 2019 into early 2020 and made a top on March 9, 2020 before its short-term decline. In fact, during the global market crashes of February-March this year, gold only declined about 14%, while the S&P 500 plummeted more than 35%.

Gold is now getting into an area where the bulls have to be very careful. The gold miners ETF, GDX, hit our target (blue horizontal top line) on July 9, 2020 and retreated, forming a negative “hanging man” candlestick. This could be a top for the mining stocks for a while. 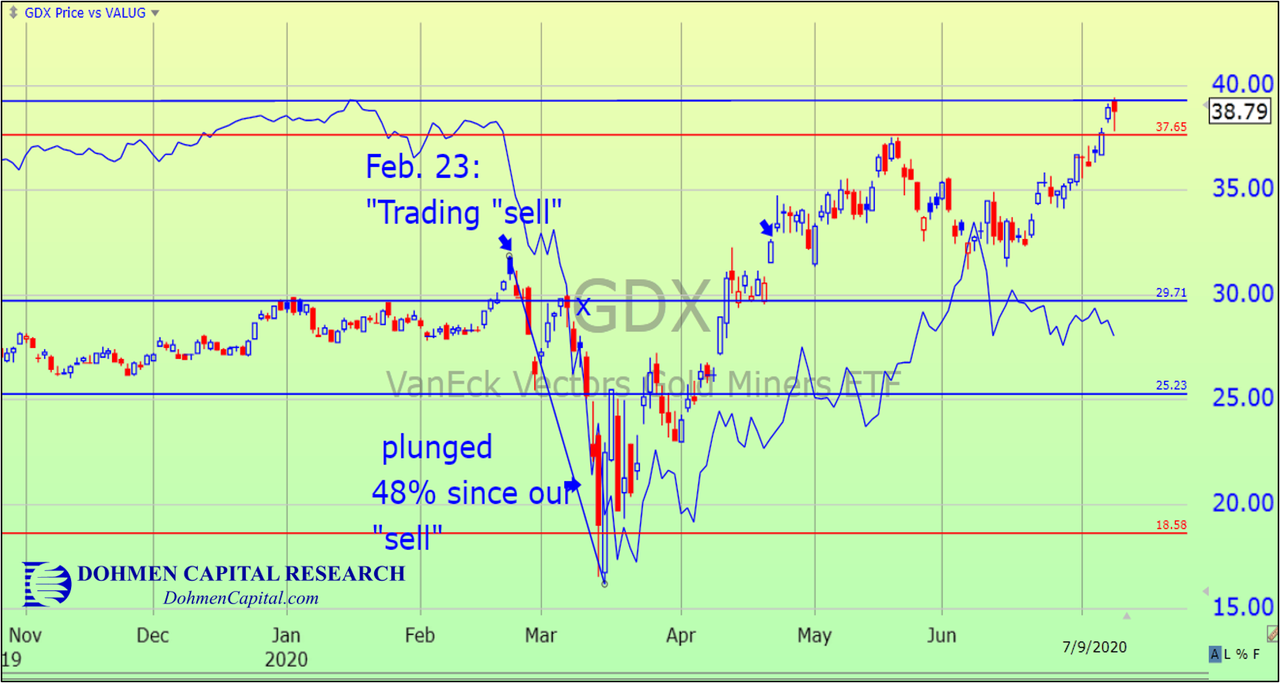 Those who knew about the underlying bull market cycle and stayed in were rewarded. Gold prices rose roughly $240/oz. over the entirety of 2019, the largest annual rise seen since 2010. And in 2020 so far, gold is the best performing asset. How did a worldwide pandemic, economic shutdowns, and unprecedented central bank action factor into this?

Despite all the attention on stocks, money has continued to flow into gold; as of this writing, prices had surpassed the psychologically significant $1800/oz. level, higher than any prices seen since 2011. A stronger resistance level is in the $1900 area.

What’s driving each of these rallies? The Fed is injecting massive amounts of liquidity into equity markets by pushing down interest rates, buying individual issues of corporate debt for the first time in history, and establishing many new types of loan facilities thus guaranteeing true junk. Meanwhile, massive stimulus packages for individual Americans are inflating personal incomes and, by extension, corporate revenues.

Gold, however, has seen no such artificial support. We reported in October that central banks around the world were buying it up in unprecedented amounts – now, they’ve ground to a halt. Russia, one of the biggest buyers last year, halted all of its gold purchases, and others have liquidated the metal in favor of currency reserves. They have to use their cash reserves for more urgent problem brought on by economic contractions.

Furthermore, the numbers from the Fed show that the Fed has been withdrawing stimulus the past 4 weeks. That’s an important change from the huge injections since late March. It could trigger a sharp correction in many assets, including gold and silver.

In the past, such changes in governmental purchases have been negative for gold prices. This is why caution is advised now. Gold hit an 8-year high just days ago.

However, now may not be the best time to jump into gold. Investor bullish sentiment is very high, which is a flashing yellow warning light by itself.

Remember an old wisdom: the big profits are made when you buy. In other words, buy low, not high.

Investors who are patient and wait for the right opportunity to buy will do much better than those who choose to ignore the signals and go with their emotions.

Our long-standing next target has been the previous all-time high, in the $1900-$1930 zone, as shown on the chart below. Such targets may not be reached or may be exceeded. We consider them to be “guideposts.” 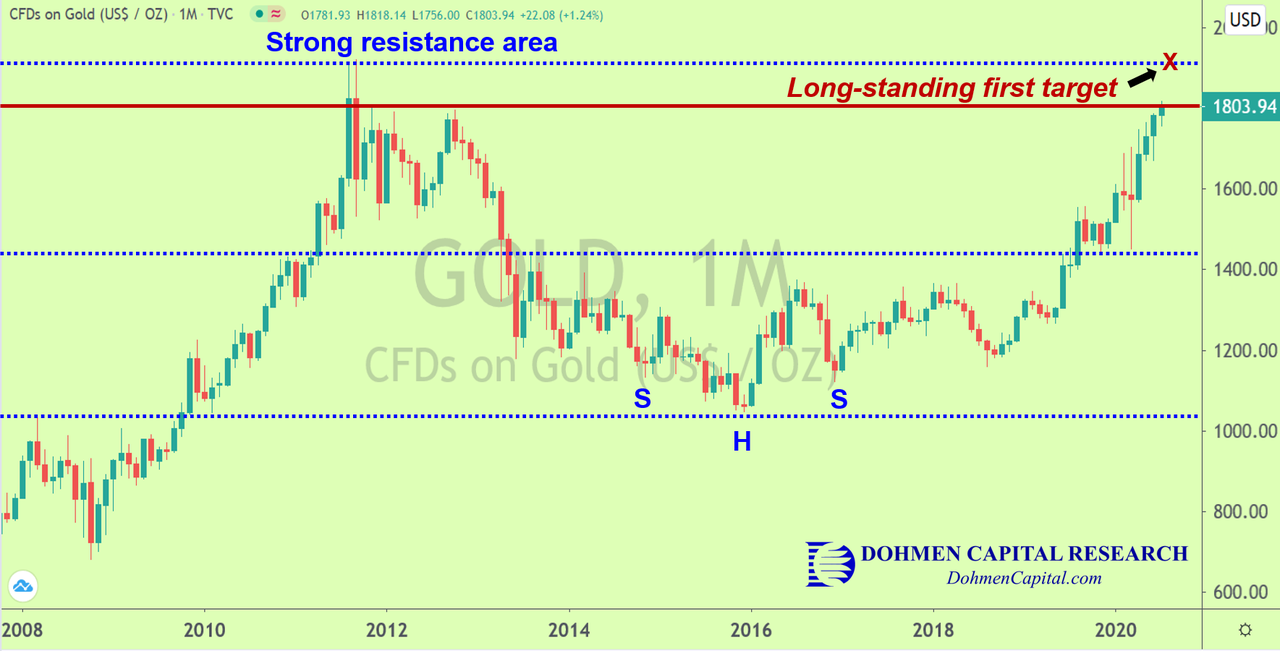 We will be closely watching money flows, market sentiment, and actions by central banks to help determine the next good entry point for our valued clients.