Home » Why Stimulus Can’t Stave Off the Impending Market Correction

Why Stimulus Can’t Stave Off the Impending Market Correction 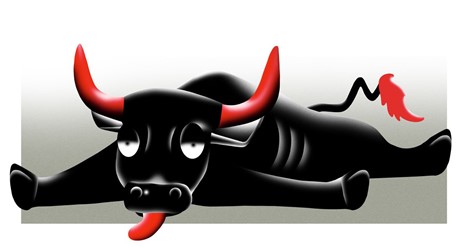 When analyzing the markets, it is important to differentiate between one’s longer-term and shorter-term outlook. Our longer-term outlook, spelled out in detail in our newest Wellington Letter issue, is focused primarily on the government’s record-breaking efforts to stimulate the economy, flooding the financial system with easy money and credit.

While this may be enough to stave off a major crash for some time, it may not be enough to sustain the market’s vastly overextended bull run of the past several months. Increasingly, in the short-term, we see important signs of exhaustion that could lead to a painful correction.

In fact, the early stages of this may already be here. You see, when you throw a ball up, it loses momentum, and at the peak of its rise, momentum is zero. Only then does momentum turn negative.

This can be similarly seen in the market action over the past few weeks. The recent weakness in major tech stocks has driven a dramatic divergence between the NASDAQ Composite and the other widely watched large cap indices. Below we show a chart for the QQQ ETF, which tracks the NASDAQ 100:

The QQQ’s price action for the last two months has been by far the most bearish seen since the crash in early 2020. After the index officially entered correction territory at the beginning of March this year, dip-buyers swarmed in, prompted by analysts in the mainstream media, to catch the index at support from last September’s highs (circled region on chart).

However, the bulls may have been too eager. The index has tried and failed to cross above the now bearish trendline resistance (red line).

An even worse picture has emerged for small caps, which, after vastly outpacing the S&P 500 year-to-date, have made several sharp retracements so far this month. We show the chart of the IWM, an ETF tracking the small cap Russell 2000 index, below:

The Russell 2000 has mostly stagnated over the last 2 months, occasionally breaking out to new highs, but on much weaker momentum, as indicated by the downtrend in the 14-day RSI (purple line, bottom of chart).

From a technical perspective, caution is certainly warranted in this current market environment. But what could be the fundamental driver of the ongoing weakness? Will it remain confined to tech stocks and small caps?

At Dohmen Capital Research, we believe that enthusiasm for the economic reopening and recovery may be overblown. When we start to see a genuine return to positive earnings for many companies, investors’ far-fetched expectations will need to come down to meet reality.

This may be happening already in China. Although their reported numbers are dubious and should not be trusted, they claim to have returned their economy mostly to normal, having supposedly resolved the COVID-19 outbreak within their country.

Yet, in the past few months, the Invesco Chinese Technology ETF, CQQQ, has wiped out nearly 50% of its rise since last year’s bottom, and is now down more than 27% from its high:

The plunge in the Chinese stock market is far less surprising when we get a real look at the state of businesses in the country. Corporate bond defaults, already on pace for a record year, hit their highest monthly level ever for Chinese onshore companies (chart from Daily Shot Brief): 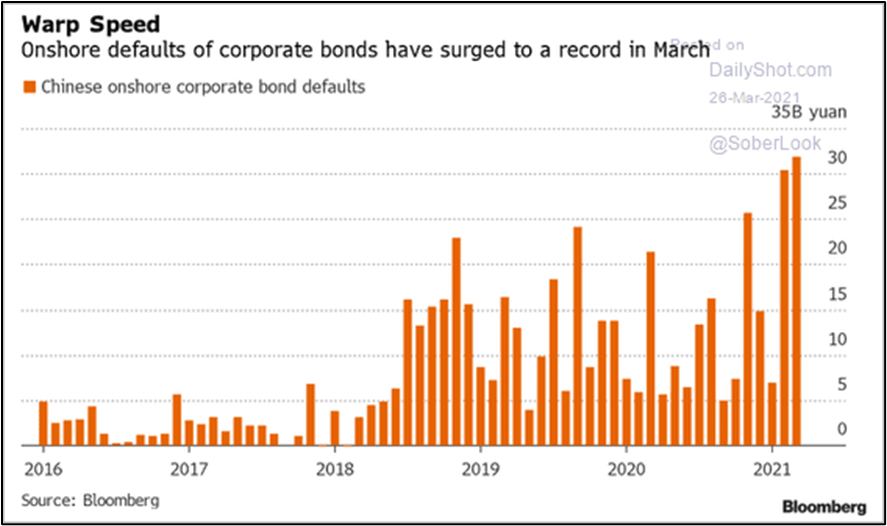 If investors are indeed overestimating the strength and speed of the incoming economic recovery, as they appear to have done in China, the impact will be widespread, beyond the popular tech stocks and small caps. This means investors should be especially wary on the long side for all the major indices, at least in the short-term.

We still see speculative activity raging on in the U.S. markets as IPOs and SPAC offerings continue to roll off the conveyor belt at record pace. However, call option speculation has dropped around 30% from its highs this year. That shows exhaustion, although speculative fever remains high.

The speculators just seem to be “all in.” And this could make the next market plunge even more severe.

For instance, on Friday (3/26/2021), we saw the potential impact of a speculative failure at the institutional level. Archegos Capital, a family office, was forced to liquidate massive positions due to margin calls, dumping millions of shares of ViacomCBS, Baidu, and other tech and media companies.

This would be an easy excuse for the regulators to stop by and crash the party. When supposedly safe family offices are taking on massive leverage and acting like hedge funds, something is wrong. Your portfolio should not be wiped out by a 10% correction in a few tech indices.

The SEC is already in the early stages of a probe into the SPAC frenzy we’ve seen this year, and it appears the Fed and many government agencies are gearing up to fight off private cryptocurrencies. These are all factors that could pose a significant threat to the current bullish phase of the market.

These, however, are all short-term catalysts. In the long run, there are more important underlying factors that could create a very different outlook for the markets. In our new Wellington Letter, we look at the true state of the ongoing recovery and, more importantly, how government and monetary policy will play an enormous role in the market’s trajectory in 2021.

Learn about the bearish signals that have now surfaced as the markets have lost momentum in our latest Wellington Letter. Get your copy today and join the winning minority!