Why the Stock Market is Finally Paying Attention to the Economy 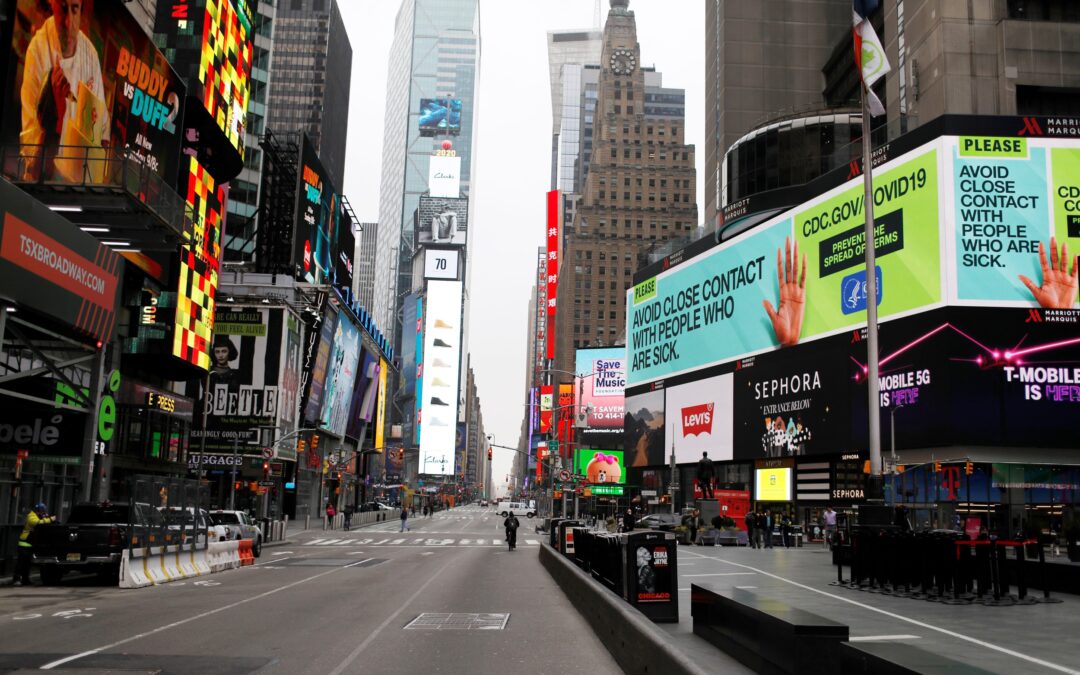 Last week (October 6th) investors were taken by surprise as the Dow suddenly plummeted over 600 points in a sharp 20-minute selloff late in the trading session. The S&P 500, NASDAQ, and Russell 2000 likewise plunged into negative territory, completely reversing what was otherwise a mild up-day for stocks.

The cause was an announcement by President Trump that he would be ending all negotiations in Congress of a new fiscal stimulus bill before the election. Almost instantly, traders quickly began selling huge stock positions across all sectors.

For the most part, stock prices seem to have readily ignored the dismal state of the U.S. economy, which by many measures is undergoing one of the worst recessions since the Great Depression.

Since the President’s announcement last Tuesday, the House and the Senate have been playing ping-pong, going back and forth in negotiations, as both sides struggle to find a compromise. However, one thing remains certain: the markets are waiting with bated breath for a deal.

In our latest issue of the award-winning Wellington Letter, “A Turbulent Election Season Ahead,” we examine several new factors that will drive stock prices in the coming months. Fiscal stimulus, however, has clearly become the forefront issue on traders’ minds. Therefore, it is of utmost importance to understand the real depths of the recession we’re in right now and how difficult it will be for the U.S. to recover.

The latest economic data provides the realistic picture of the numerous obstacles, both fundamental and technical, that lie ahead for the economy.

The unemployment rate, which has been on the decline over the past few months, only recently fell back below the peak level during the Great Recession in 2008-2009 (red dotted line), as shown on the chart below:

Think about that; it’s been a long 6 months since the outset of the pandemic and the resulting economic shutdown, and yet the “official unemployment” rate only recently came back down from the worst unemployment rate since the 2008-2009 Financial Crisis and recession.

According to the latest report from the BLS, the U.S. economy added 661,000 jobs to nonfarm payrolls in September while the unemployment rate fell to its lowest level since the start of the pandemic, at 7.9%.

Economists’ consensus, however, was that the report was disappointing. Last month’s increase was the smallest seen since the beginning of the pandemic and fell far short of expectations of 800,000 jobs. Moreover, analysts attributed the drop in the unemployment rate to a smaller participation in the labor force, not jobs growth.

In a report, the National Association for Business Economists indicated that half of the economists in a recent survey believed that 10-20% of the jobs lost during the pandemic won’t come back, while other estimates stand at more than 50%. Nearly all the survey respondents had lowered their projections for production and job growth for 2020 and 2021.

Worse yet, a new wave of layoffs has already erupted. Within only two days last month, Disney, Royal Dutch Shell, Allstate, and Marathon Petroleum all announced new layoffs that slashed nearly 43,000 jobs in total, with each company cutting between 8% and 14% of its workforce. That’s a lot of bad news for a short 48-hour period.

Yet these job cuts pale in comparison with those that could erupt from the beleaguered airline industry. Airline CEOs have made it clear that without immediate fiscal aid, the resulting job losses could be 100,000 or more.

Recovery in the labor market is critical for the economy. While some analysts may emphasize retail sales, industrial production, or other measures of output, no increase in any of these figures will be meaningful if Americans don’t have jobs and aren’t earning enough to sustain their current spending.

Layoffs may save companies money, but that doesn’t mean they’ll be in good shape any time soon. Filings for Chapter 11 bankruptcy increased once again in September to approach the levels we saw just two months prior in July, as shown on the chart below (via Epiq AACER): 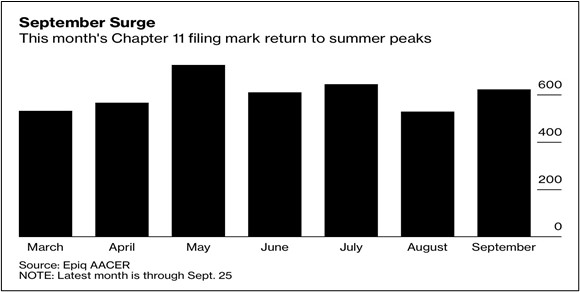 This trend suggests that not only is the economic recovery stalling, but that the outlook for business owners is getting even worse.

Tourism, travel, and energy continue to face insurmountable headwinds. Carnival recently joined its peers Royal Caribbean and Norwegian in delaying its cruises until December. With the CDC already having moved back its No-Sail order several times this year, it wouldn’t be surprising if the major cruise lines are landlocked well into 2021.

All three cruise companies have struggled to maintain liquidity during a period where revenues have nearly vanished completely. In Carnival’s latest earnings release, year-over-year revenue for last quarter was down a staggering 99.5%. How can they possibly stay “afloat” for much longer? Only by adding more debt.

On Tuesday, October 13th, shares of Royal Caribbean (RCL) fell 13.2%, their largest single-day decline since June, after the company announced that it was raising $1 billion in a new equity and senior debt offering. Despite leading its peers year-to-date, as shown on the chart below, Tuesday’s plunge closed a significant portion of this gap. All three cruise stocks are currently down between 55-78% year-to-date.

Worldwide travel will likely be one of the last industries to recover from the pandemic’s impact. This industry is one of the biggest sources of demand for oil and fuel products. The IEA reported in their recent World Energy Outlook that energy demand will not return to pre-COVID levels for another three years, even in their best-case scenario.

With these considerations in mind, it is easy to see why Energy companies have been totally left behind even while the major stock indices have gone to new highs. Below we show the SPDR Energy sector ETF, XLE (candlesticks) versus the S&P 500 index (blue line). The chart speaks for itself.

We are truly surprised at how optimistic so many analysts in the media have been on the so-called recovery. At Dohmen Capital Research, we prefer to look at the long-term economic trend. We will see rebounds from this year’s lows in sales and earnings, but a return to last year’s levels will be elusive in most industries.

The important factor is that companies have significantly reduced payrolls and have found that they can operate well remotely and with few people. Everything points towards “shrinkage,” not expansion above last year’s levels.

As we’ve shown above, the economic outlook doesn’t look very bright in the near-term, despite the stock market rising to potentially new highs. It will take considerable effort on behalf of the government to avoid prolonging what is already a historic recession.

We caution investors and traders alike: don’t get too bullish!