Home » Will A Rate Cut Be As Bullish For Stocks As Everybody Believes?

Will A Rate Cut Be As Bullish For Stocks As Everybody Believes? 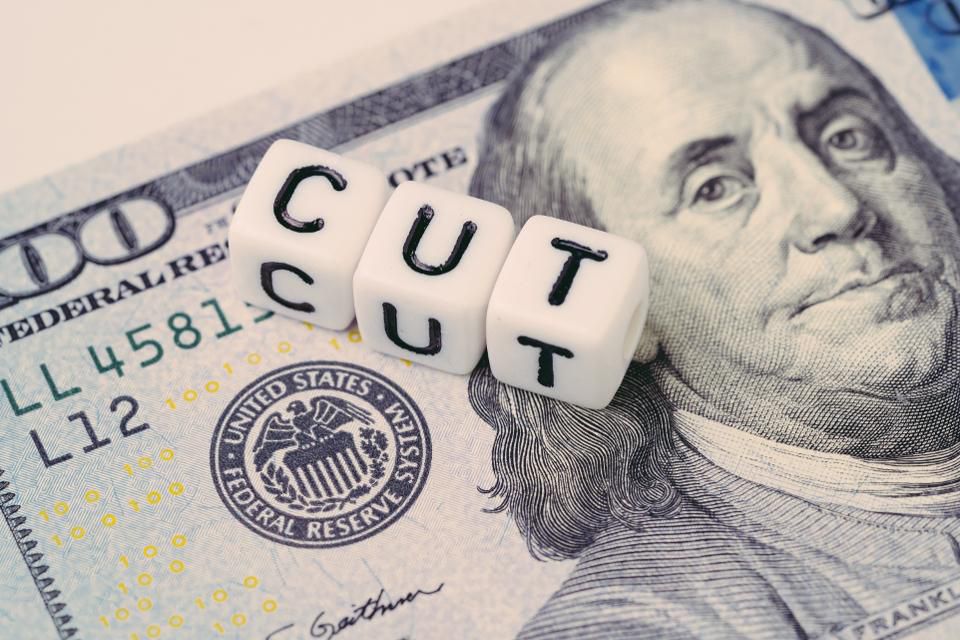 Fed head Jerome Powell’s assuring testimony in front of Congress on July 10th hinted more than ever that a rate cut would be made later this month. This sent the major averages soaring to new record highs on the DJI, S&P 500, and NASDAQ.

However, at Dohmen Capital, we pose the important question: “are declining interest rates bullish for stocks?” This is what all investors should be contemplating right now.

Many analysts say that a decline in interest rates will be used as fuel for more enthusiasm for stocks. That works…until investors find out that declining rates are indicative of economic deterioration.

In our latest Wellington Letter, we examine how the state of the economy has led to expectations that the Fed might actually cut rates this year, perhaps 2-4 times. Four cuts would signal that the Fed is panicking, which would be very bearish for stocks.

As our readers know, our view since late 2018 is that the next move by the Fed would be to cut rates. We expect the Fed to cut rates 0.25% percentage points on July 31. Not cutting would shock the markets, as would a larger cut. And that will just be the start.

That may produce a knee jerk rally, but it’s important how the markets react thereafter. Contrary to what you hear from money managers who don’t do their homework, our position has been that when the Fed starts cutting rates, you want to sell stocks, not buy.

Historically, the first cut usually leads to the start of a serious bear market. Once they stop cutting rates, it’s the bottom of the bear market when you want to buy.

Here is a chart from our friends at Bob Prechter’s Elliott Wave International that shows the history of rate cuts and the market’s response. The black line graph is the S&P 500 while the blue line is the Fed Funds Target Rate: 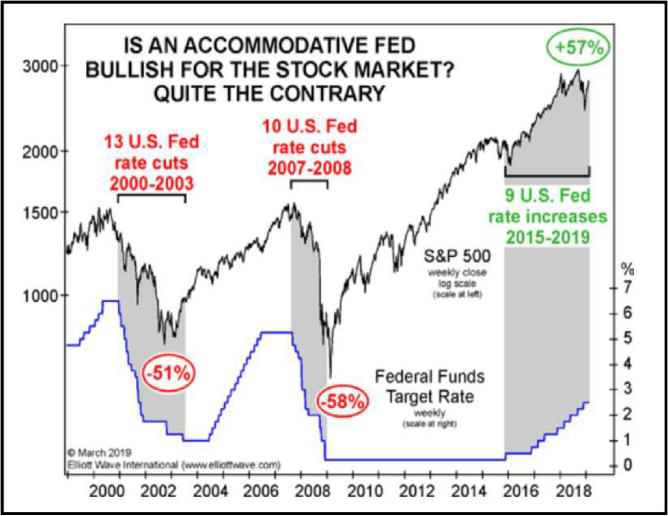 History shows that when the Fed cuts, stocks decline. When rates stay flat or they hike rates, stocks rise. That is contrary to the fables you hear from many analysts.

Contrary to widely-held belief, we have always said that the price of a stock is not a function of “valuation” and all that stuff analysts always talk about. If that were relevant, why is the DJI at one time selling at an expensive P/E (valuation) of 20 and still rising, and another time at a “cheap” 12 and still plunging?

And why are stocks without any earnings often the biggest gainers when markets rise?

Analysts always recommended stocks that they say “are cheap” on a P/E basis as if they have made an amazing discovery. With today’s tools available free to any investor, millions of investors know when a stock is “cheap.” If that were important, they would all be buying that stock and it would no longer be “cheap.” But these stocks stay cheap, because of more important reasons.

Prices are much more a function of money flows, which depend on more important factors not always known to the general public. And when all the money is in, there is no more money left to drive stocks higher. That then marks the top. And then the demand/supply equation shifts, and selling accelerates.

We have to recognize earnings and P/E ratios show the past. A successful investor tries to see the present and the future. Private sector, not governmental, credit market and economic statistics show this much better than past earnings.

One of the most valuable economic numbers is the PMI (manufacturing purchasing managers index). The PMIs just released for Chicago and NY State are in “contraction” territory, below 50. That means ‘recession.’ Does anyone care? They should.

The PMI is much more relevant than governmental statistics as they come from companies, not from bureaucrats. Below 50 is serious, but the bulls ignore it.

The PMI (manufacturing) in China for May (reported July 23) dropped back into ‘contraction’ territory, to 49.4. China used to be considered the economic engine for the globe.

The PMI from the EU on Wednesday (July 24) showed more weakness, in fact the greatest weakness in 7 years.

This interpretation of the weak PMI data caused the EU markets to have a bounce. Who knows, if they announced their economy was going into ‘depression,’ those markets might soar to record highs temporarily.

QE would be interpreted by the market that central bankers are getting very worried about a financial market “event” that could cause this house of cards of debt to collapse.

This is just like 2008 when all our work showed the economy was going into recession, but the cheers of the bulls drowned that out.

When the price of oil hit a high of $147 in mid-2008, we gave a “sell” on oil because money flow analysis showed the big, smart money was getting out.

We found confirmation in our call when a major Wall Street firm came out with a price target of $200 for oil. When we see that, we assume the motive is to whip up demand so that insiders can sell large positions.

Our book written in 2007,  Prelude To Meltdown, gave the warnings that a global crisis would occur in late 2008. It did!

Always remember, when just about everyone is bullish on the markets, it usually pays to be on the other side. 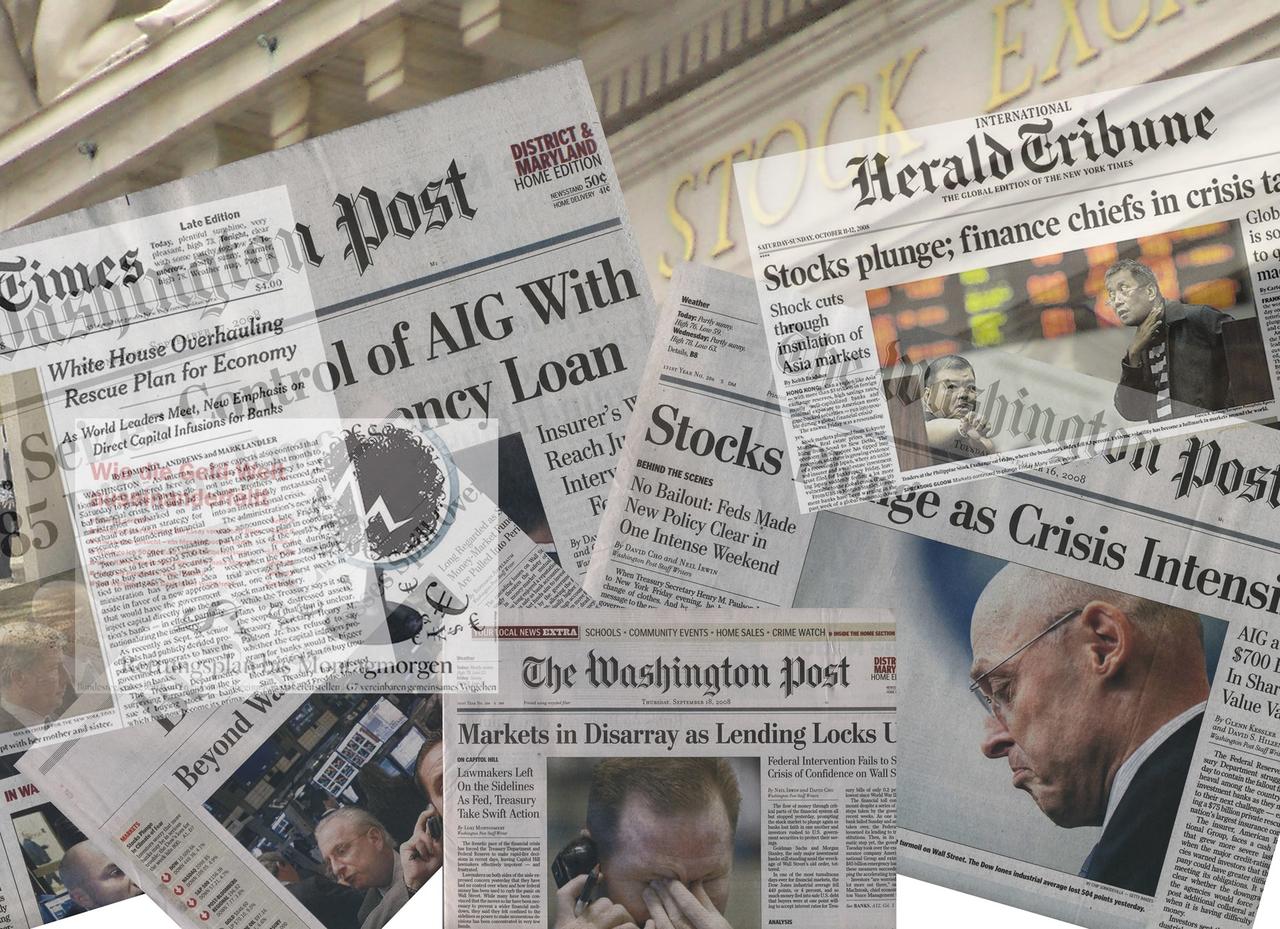 In the book, we predicted that the global financial system would go to a near-meltdown state in 2008. That forecast was widely disregarded and most investors didn’t believe that would happen.

It’s a fact that “denial” is the most destructive of people’s emotions. It’s human nature not to want to believe the possibility of something very unpleasant. But, in the end, we were right.

On September 4, 2008, the very day the credit crisis became serious, we recommended that our clients buy a number of specific inverse ETFs, which are designed to rise in price as the sectors or indices plunge.

These had extraordinary gains over the next five weeks, gaining an average of 72% during that time as the markets plunged.

Our clients were smiling during the crisis, as they have been during every bear market over the past 42 years.

By early 2009, it was estimated that total wealth destruction globally was around an astonishing $64 TRILLION. That’s almost five times the annual GDP of the U.S. (at the time).

Our clients prospered and were able to take full advantage of the bear market strategies developed over more than four decades.

We have always said that bear markets actually bring greater opportunities than bull markets, because stocks decline faster than they rise. And furthermore, the bearish side is not as crowded.

However, the markets go in cycles. It is important not to get stuck in a rut.

On March 6, 2009 we gave a signal to start closing out short positions, which had been so profitable during the crash. As we now know, that was the exact low of the devastating Bear Market.

On March 9, after the weekend, we gave buy recommendations, writing, “the up-move will last longer than even the bulls expect.” In fact, it lasted longer than we had expected.

The majority is seldom, if ever, correct. If you need help, find yourself an analyst with the courage to go against the crowd and decades of experience in the markets, both of which can be essential for superior results. Most importantly, find a firm that has no conflicts of interest, allowing you to receive unbiased research, analysis, and guidance.

Currently, as discussed in our award-winning Wellington Letter issue of July 22, we see some very dark clouds forming. Whereas just about all analysts look at the stock market for potential danger signs, we look at the signals coming from the Credit Markets. Those are much bigger and therefore, much more important.

We see a potential disaster on the horizon, similar to that of the Lehman Brothers failure in September 2008 that triggered the global crisis. It could be another huge opportunity to profit from a crisis, as we did in 2008.

You see, just predicting “gloom and doom” isn’t going to work in this environment. We try to find ways to profit when everyone else is panicking.

Our goal since 1977 is to educate serious investors and provide them with insights they may not read anywhere else. The concepts we have pointed out over the past 40-plus years will help them for their whole lives.

The next several years will truly be exciting. Try to set your emotions aside. When everyone around you wants to plunge in, consider doing the opposite, but only when the charts give you the timing.

Fortunes will be made and lost the next several years. We hope you aim to be in “the Winning Minority.”